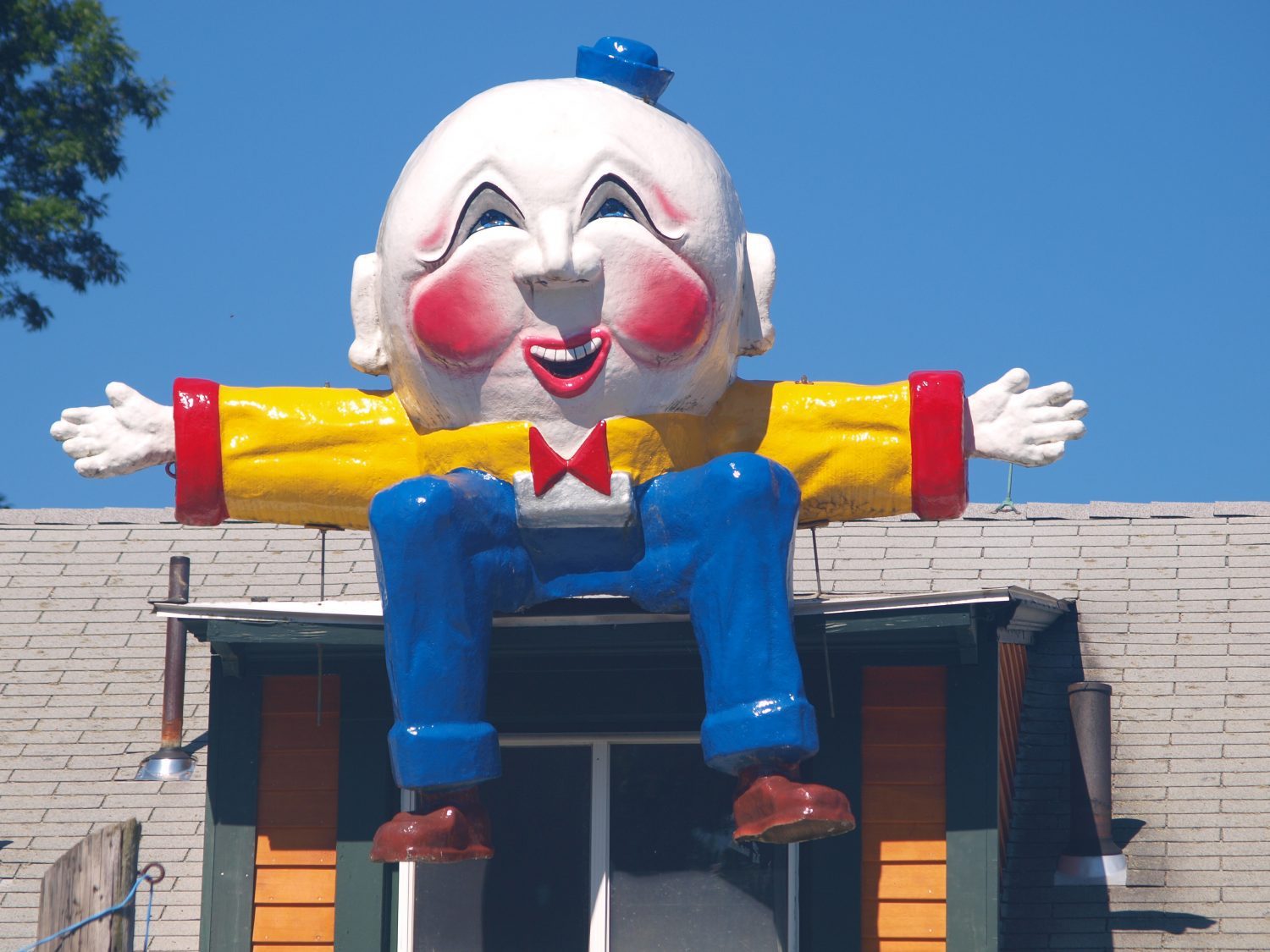 This gigantic Humpty Dumpty, perched atop the main office at Quassy Amusement & Waterpark, was acquired from the Danbury Fair in nearby Danbury, after the exposition shut its doors in the 1980s
Industry Reports

A unique blend of the old with the new

A unique blend of the old with the new

WHEN the gates at just about any amusement park open, there is an immediate mad dash to the largest roller coaster or fastest waterslide. Call it human nature – if you will – to be among the first in line for that morning adrenaline rush offered by the most thrilling attractions at any particular property.

And while waiting in queue lines or even strolling the midway, it’s not unusual to see a lot of folks with their eyes glued to their cellphones instead of absorbing all a particular park might have to offer.

Take for instance the not-so-hidden treasures at Quassy Amusement & Waterpark. While some of the locals have been coming to the property for generations, many guests do not realise they are surrounded by bits and pieces of Americana that are slowly disappearing from the amusement industry landscape. 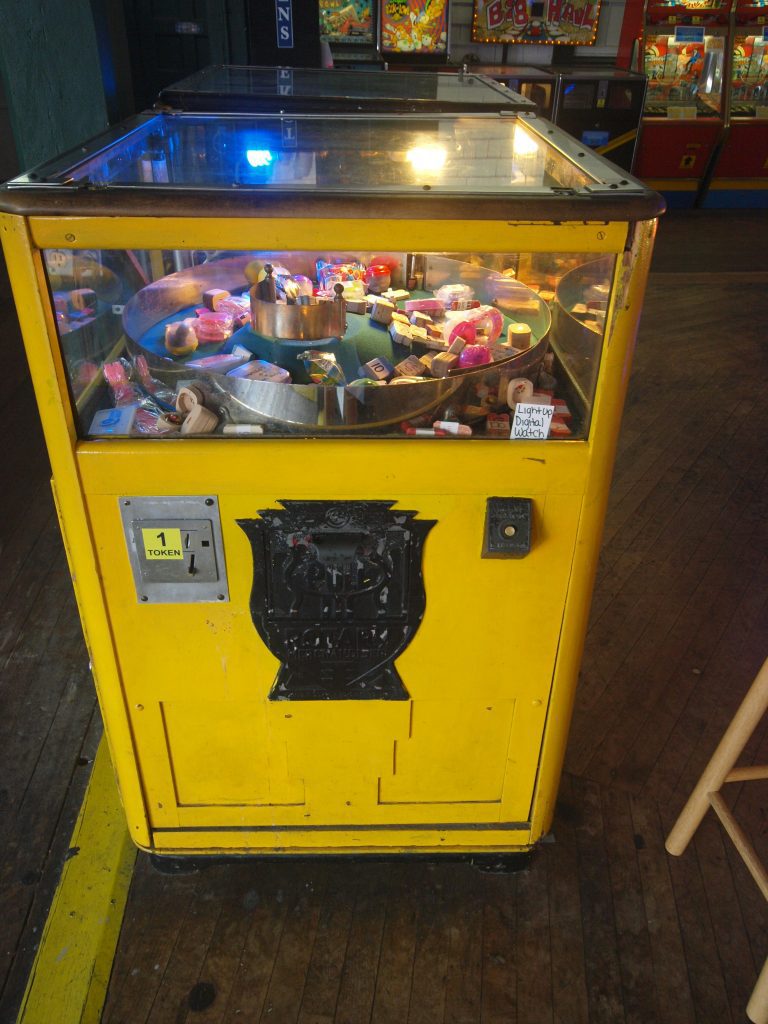 Inside the huge redemption arcade in the heart of the park are a variety of games that have been around since the early part of the last century.

Perhaps the most interesting machines are two Rotary Merchandisers produced by the Exhibit Supply Co. of Chicago, Ill (circa 1931). They are a rather simple contraption to play, with an arm that sweeps across the game’s felt-covered field as you attempt to push prizes into a shoot to redeem them.

The games were acquired by John Frantzis, Quassy’s patriarch owner, in 1971 when Palisades Park in Cliffside Park, New Jersey, closed. Though semi-retired, John Frantzis still maintains a daily morning routine of setting up the Rotary Merchandisers and other arcade games during Quassy’s season. 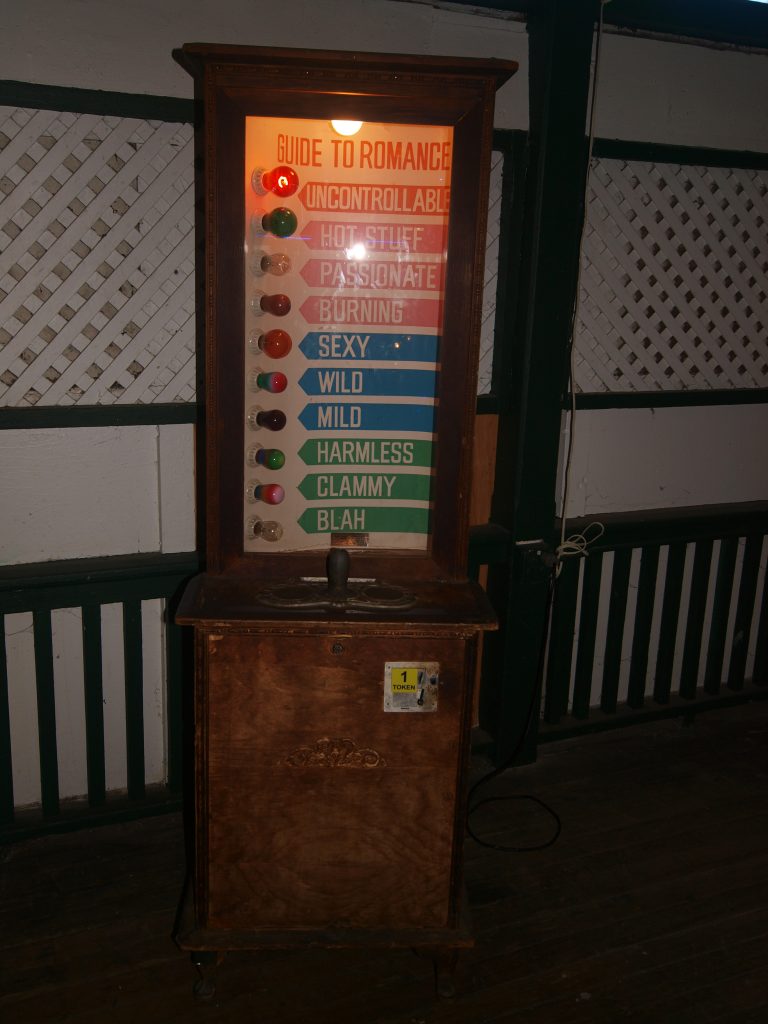 One of two Love Testers (circa 1940) at Quassy Amusement & Waterpark

Two other Exhibit Supply Co. games are located in the park. Called Love Testers (circa 1940), players deposit 25 cents and squeeze the handle, setting off a mechanised series of lights. Finally, one light remains lit showing the player if they are “blah,” “uncontrollable” or something in between. The Love Tester in Quassy Restaurant draws the most attention as guests play while enjoying their summer fare at the lakefront.

Skee-Ball is a tried-and-true arcade game dating back more than 100 years. Invented in 1908, the game has had numerous cosmetic and mechanical changes throughout the years, yet to this day offers the same exciting challenge to players. 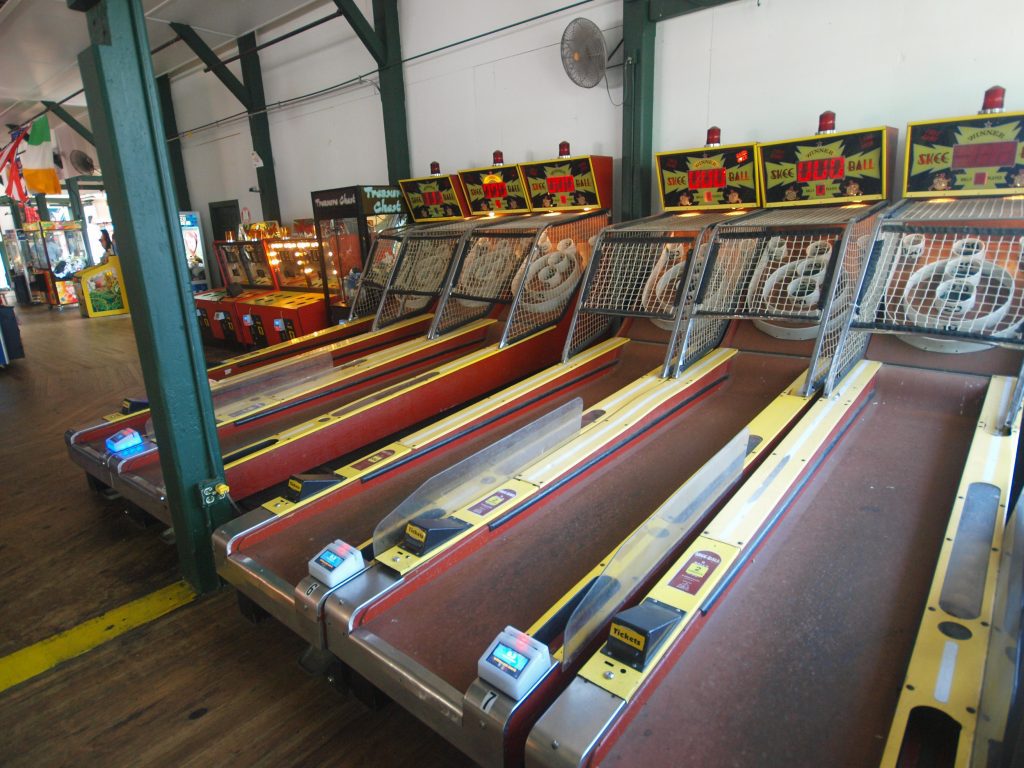 The Skee-Ball alleys in the redemption arcade at Quassy. Skee-Ball dates back to 1908 and can still be seen at a number of parks in the US

A handheld ball is rolled up a narrow alley, becomes airborne on a ramp and drops into one of a number of scoring areas on a backboard. Bay Tek Games, Inc., of Pulaski, Wisconsin, has the manufacturing rights to the product, which has changed hands numerous times since its introduction more than a century ago.

Quassy has had several versions of the game and today offers six Skee-Ball alleys in the arcade building. The latest update Quassy has attached to the game is automated credits given to players on their Quassy Game On cards, thus eliminating the need for redemption tickets to be dispensed. Many of the other arcade games use the same computerised system.

Frantzis readily admits “I hit it during the good times (1970s),” when video arcade games were up and coming and extremely popular.”

Despite the decline in video gaming, Quassy’s arcade has managed to mix the old with the new and still remains popular among all ages. Some of the newest acquisitions include The World’s Largest Pac-Man video game and the Quassy Quest Laser Maze. 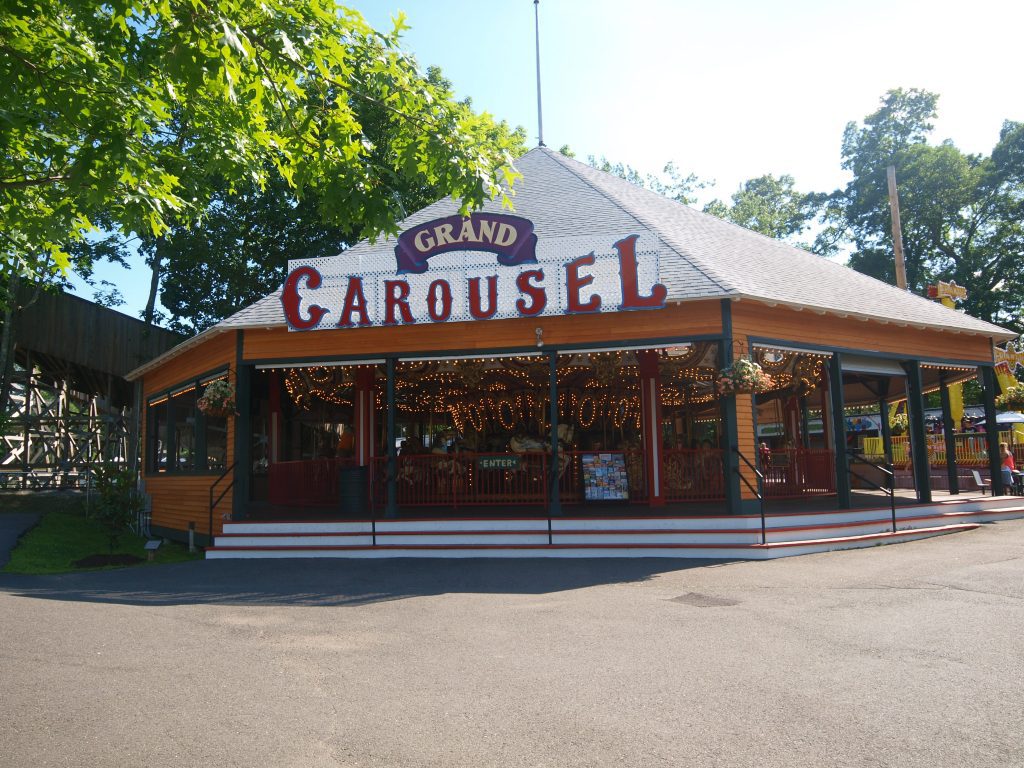 The 1927 carousel roundhouse at Quassy is a treasure in plain sight. The Grand Carousel operating inside is the second such ride to be housed under the structure

There were lions and tigers and … Humpty Dumpty!

It seems as though a rite of passage growing up in western Connecticut years ago was to attend the Danbury Fair – 20 minutes from Quassy Amusement Park. What started out as a three-day event grew into a 10-day run which attracted hundreds of thousands of guests from Connecticut and neighbouring states.

“It was huge, and we used to take a full (tented) arcade operation into there,” noted Quassy president Eric Anderson, who is also John Frantzis’ son-in-law and an owner. The sprawling fairgrounds covered more than 150 acres by the time the last exposition was held in 1981.

The fair was known for fantastic food, entertainment and a menagerie of fiberglass figures that delighted young and old.   A year after the fair closed the late George Frantzis, then Quassy president, acquired a number of the figurines from the fair. They included a lion, tiger, hippopotamus and colorful Humpty Dumpty.

While they made various appearances throughout the park, the lion found a new home in 2014 when Quassy Zoo, a children’s playground, opened near the entrance to Quassy Beach and Splash Away Bay waterpark. The huge Humpty Dumpty figure, perched high atop Quassy’s main office, draws many a comment from astonished guests. 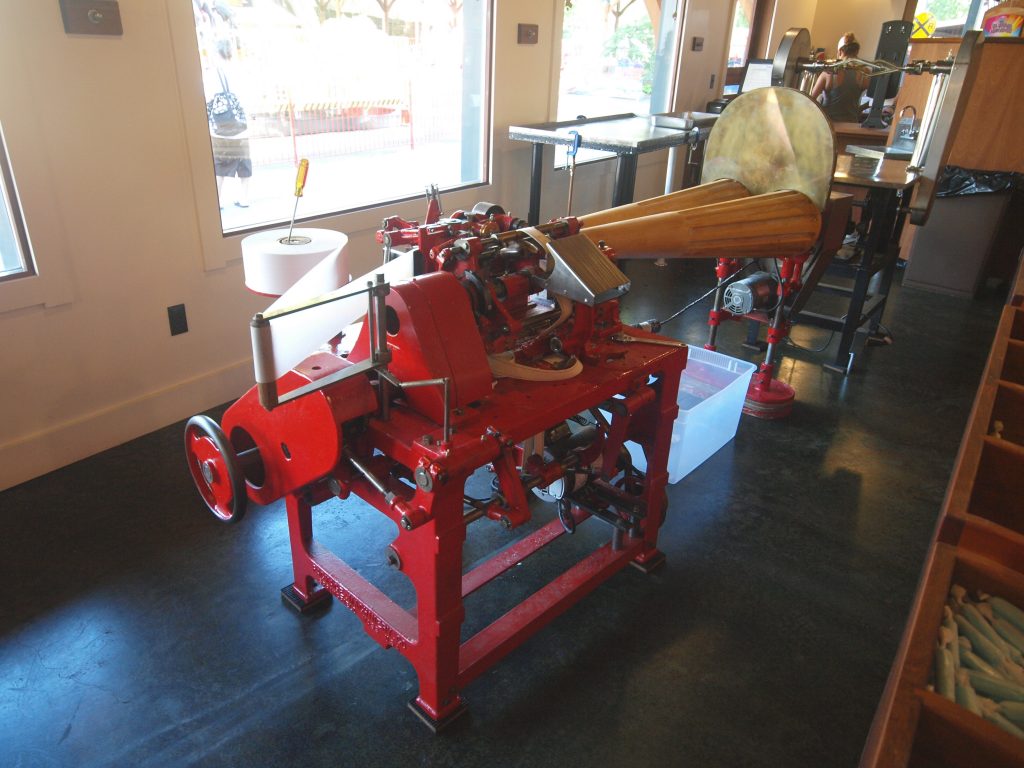 This taffy wrapping machine was refurbished to like-new condition for Quassy’s new candy shop. The machine was built a century ago

Last year the park unveiled an endeavor that took several years to unfold: old-fashioned taffy-making. Quassy purchased two century-old machines used in the production of homemade taffy and got the operation off the ground in the spring in Bella & Bessie’s Sweet Shoppe & Pizzeria, a new building just past the Grand Carousel.

A specialty firm in North Carolina took more than two years painstakingly refurbishing a taffy puller and wrapping machine for the park. The wrapping machine was built by Package Machinery Co., of Springfield, Massachusetts.

“It’s been important for us in recent years to make improvements at the park, including world-class attractions such as our Wooden Warrior roller coaster and a new waterpark,” said owner George Frantzis II, whose grandfather purchased the property in 1937. “But equally important is the heritage of the property. We have diligently maintained some of the oldest buildings and attractions generations have enjoyed here. What we have accomplished is a unique blending of the old with the new.”

He concluded in saying: “As one of the few remaining trolley parks in the nation we believe it is not so much our mission to maintain that heritage, but our responsibility.” 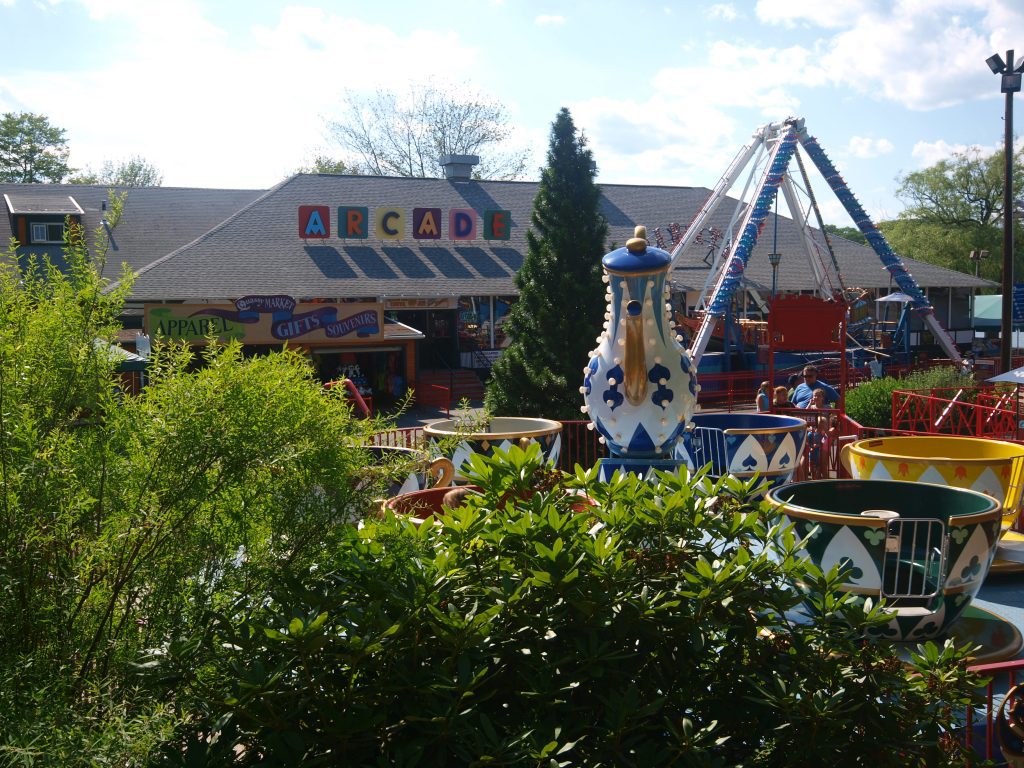 The redemption arcade building dates back to 1915 when it opened as a dance hall. The mammoth structure is the oldest building at Quassy Amusement & Waterpark

Treasures in plain sight at Quassy

Quassy Amusement Park opened in 1908 and today is one of only a handful of remaining trolley parks in the US. Before The Great Depression of 1929 there were more than 1,000 such parks. Some of the treasures in plain sight – old and new and reflective of the park’s heritage – are: 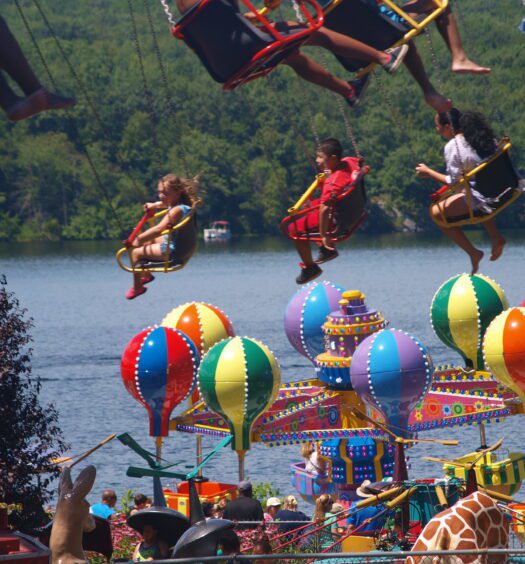 Quassy Amusement Park due to open on April 24 with community service initia... 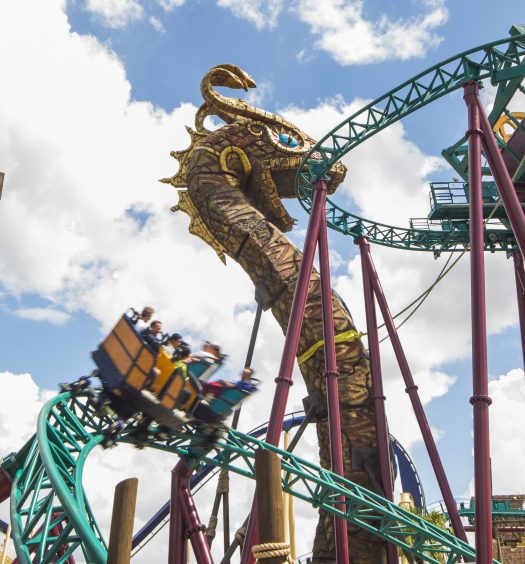