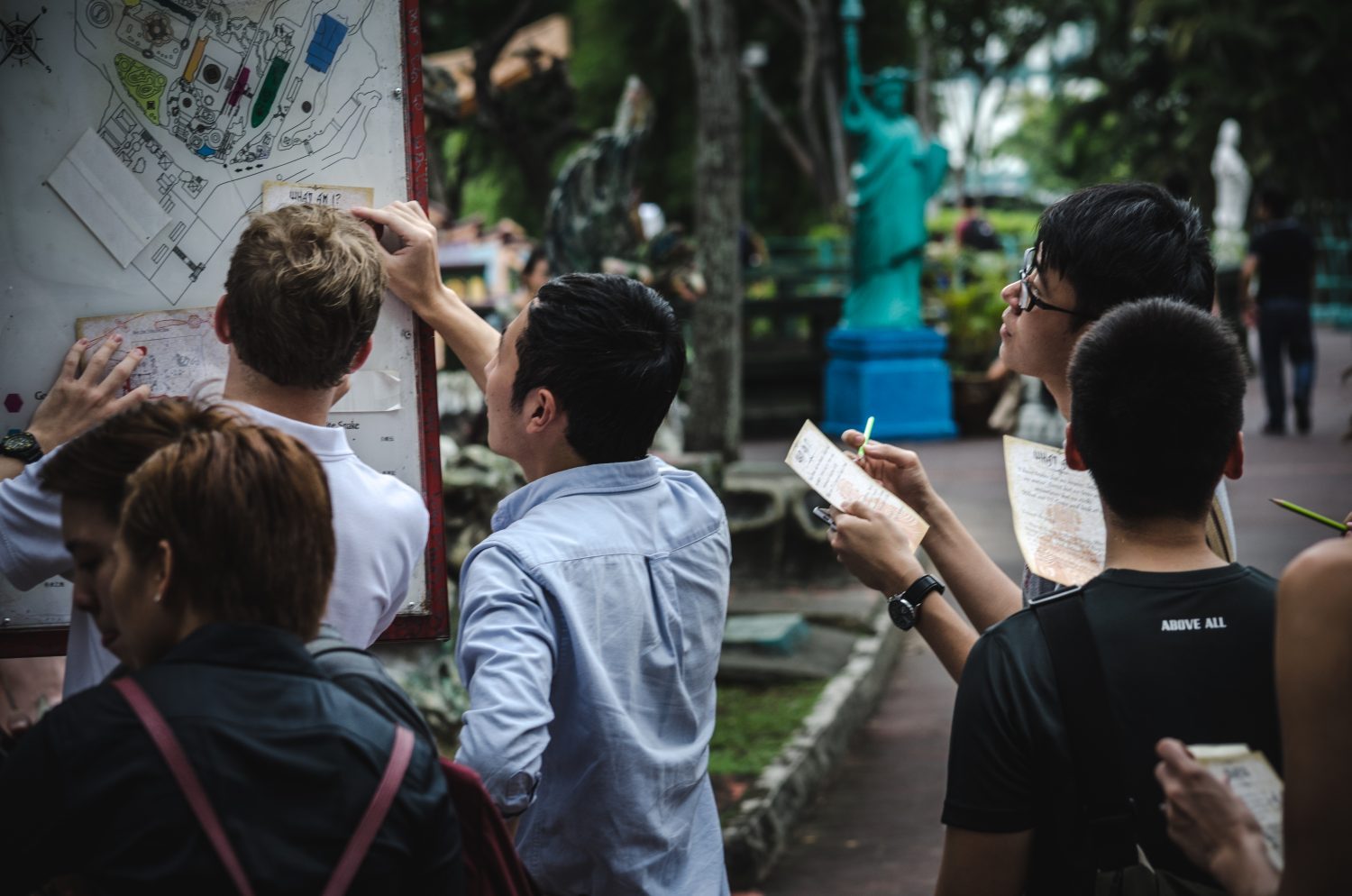 THE worldwide escape game craze has attracted growing attention from theme parks, spurring a handful of them to develop and run their own escape game experiences.

In some key ways, escape games are well suited to theme parks for logistical, operational and marketing reasons. Theme park environment can potentially offer an ideal setting for escape games, especially because those games can develop or center around relevant existing attractions and because they can mesh well with certain special events and promotions in those parks. In addition, such theme park personnel as actors may be particularly adept at playing roles in certain escape games. In essence, escape games can be very effective in heightening engagement with park guests and can serve as an additional revenue source at parks and their related facilities, especially out of normal hours. 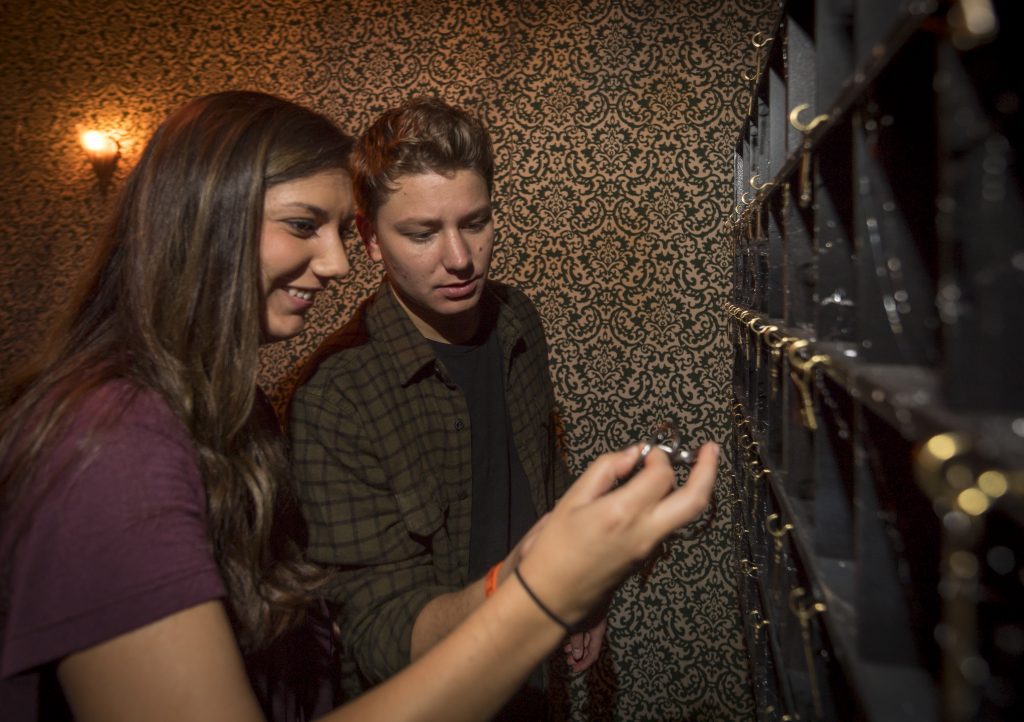 John Gerner, managing director of Leisure Business Advisors, views escape game experiences in parks as a “continuation of the trend towards more active visitor involvement in experiences” at parks. He feels that visitors are particularly attracted to these games because they allow guests “to control the experiences.”

However, escape games have significant challenges in theme parks, including their “limited capacity,” says Dennis Spiegel, president of International Theme Park Services. He feels those games are more “applicable to such entertainment centers as small FECs and lasertag centres,” as well as to “team building exercises for corporate audiences.”

Kevin Williams, founder of consultancy KWP Ltd., characterises the promise and challenges of escape games in amusement parks this way – while such theme parks as Knott’s Berry Farm have experimented with escape room-related mixed reality attractions during holiday seasons, “the design teams at parks are still unsure of the long-term value of the untested new technology and methodology behind escape rooms. It is easier to see these rooms as a temporary, seasonal attraction and gauge customer reaction. Augmented reality platforms and the latest 3D projection mapping technologies are offering an opportunity to totally change the experiential nature of the more traditional escape environment.” 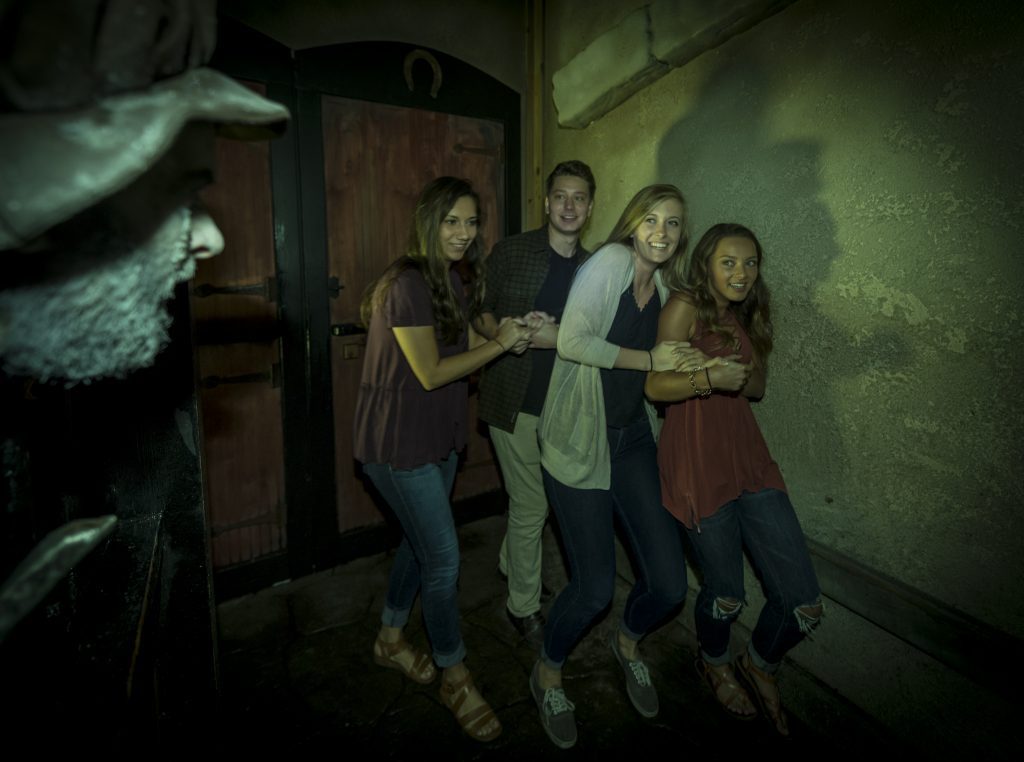 From his perspective, escape games can be run at any time in parks – Edwards doesn’t see any limitation in their application in parks. As he sees it, they’re attractive to park visitors seeking additional challenges and fun. Edwards reports that their escape games appeal to a wide range of park guests – including families, young adults and older adults. At the same time, he notes that the park in Williamsburg does monitor the effects of their Halloween escape games on under-18 audiences to ensure members of those audiences aren’t excessively frightened.

The park felt that escape games “fit well into the attractions” at the Halloween-themed Howl-O-Scream festival. Two escape games are offered at that attraction as part of the No Escape room experiences – The Case of Mr. Karver and The Case of the Haunted Hotel. Typically, six visitors at a time participate in the games.

In The Case of Mr. Karver, players are locked in a room and challenged to locate the “secret workshop of Mr. Karver, a creepy puppet master, and prevent him from making more monstrous dolls.” Players must use clues in the room to solve puzzles and try to escape before time runs out.

In The Case of the Haunted Hotel, players are trapped in a haunted hotel and are challenged to “unlock the mysteries of the hotel” using clues in order to escape before time runs out.

To participate in the escape games, visitors must reserve online and pay fees, depending on the time and nature of the games, says Edwards. He believes “it’s only a matter of time before escape games  become common in theme parks.” 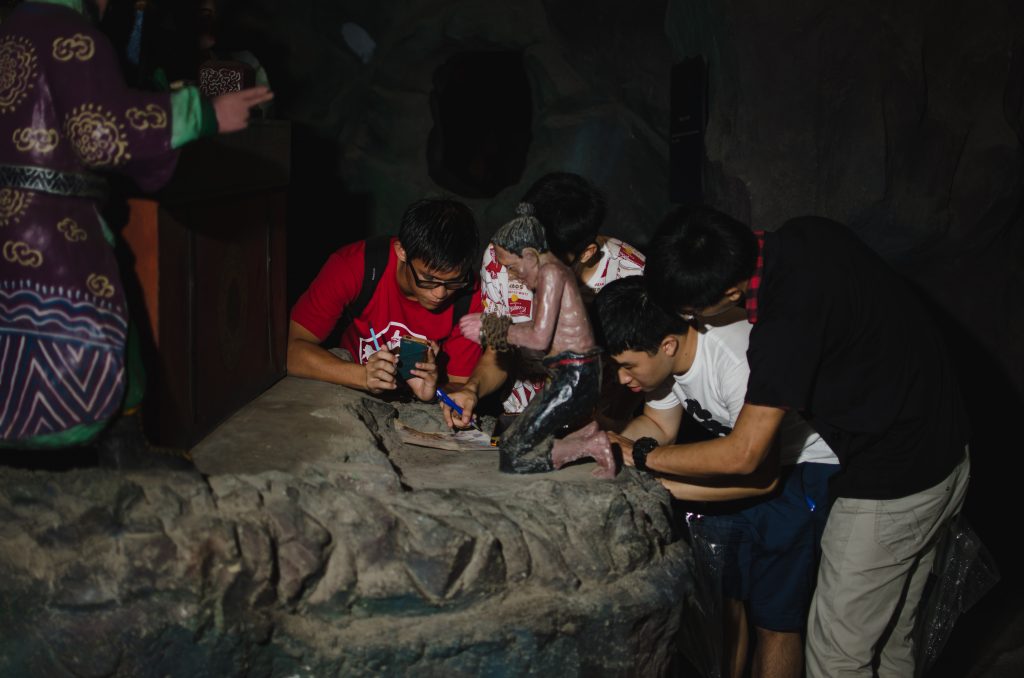 SCRAP created two different versions of the game in the parks with two different levels of difficulty in order to allow parents and their children to play together. The game blends its real escape game Real Dasshutsu and TV anime programme JoJo’s Bizarre Adventure: Diamond is Unbreakable and challenges players to defeat a serial killer called Yoshikage Kira through a series of “stand” battles with him and other villains. In the process, players solve puzzles using clues.

Some of SCRAP’s real escape games for parks are held during regular hours, while others are run out of hours. One of the obvious advantages of running these games out of hours is the ability to “use the entire park for the games” and offer the participants “a special experience,” says Ito. Through these games, SCRAP is able to attract new customers for its games in parks,  he notes.

Haw Par Villa, a theme park located in Singapore and operated by Journeys Inc., has offered escape games over the past year and a half, particularly to attract a younger audience and enable the park to draw audiences beyond its typical closing time of 7pm. The park ran several sessions of an escape game called Journey to the End and Back as recently as October last year, which was developed by Lockdown Singapore, an escape game producer.

The game centres around a school excursion that runs amok and challenges players to maneuver through a course and decipher puzzles to rescue a friend who has fainted and entered the underworld. More than 1,500 people participated in the game over five days. It was staged across a large area of the park encompassing the Ten Courts of Hell and the Hua Song Pavilion. Regular park visitors were also free to wander the area as the game was in play, while those playing the game were charged $32 (on a per person basis.) 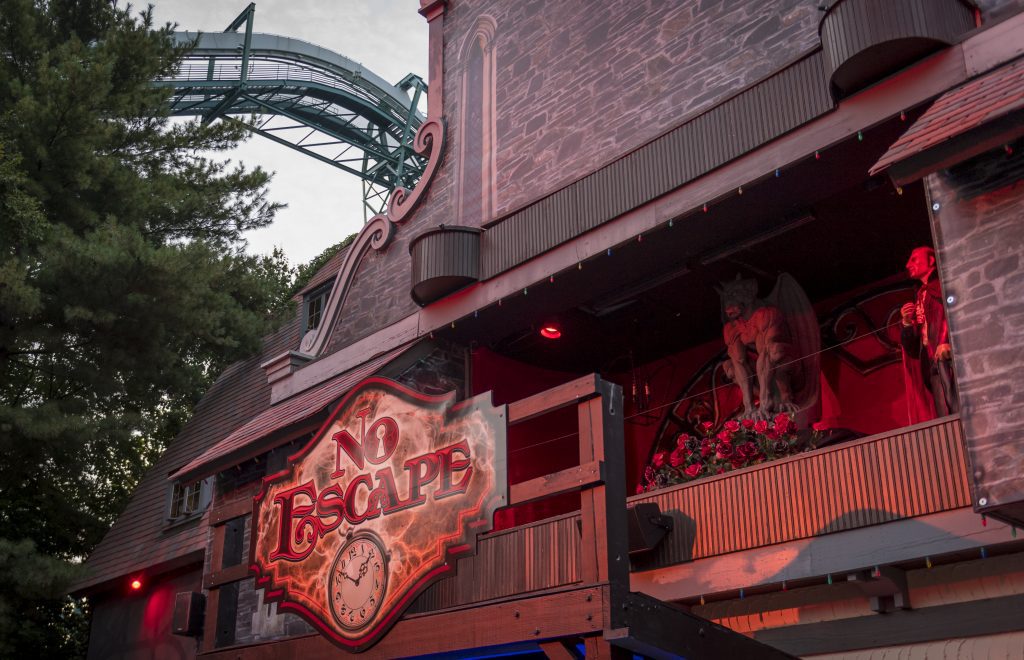 As mentioned earlier, escape games also have potential use in amusement parks and their related facilities for corporate events. In this regard, Disney Meetings last year unveiled an escape game called The Escape Challenge at Walt Disney World, geared to team building for corporate audiences.

Although escape games have had limited use so far in amusement parks, they have the potential to open up key new opportunities for  parks, especially for special events,  promotions,  festivals and even corporate events. As such, they can add new dimensions  and twists to those parks and attract diverse audiences.

“We have seen a number of parks jumping on the bandwagon of popularity concerning the escape room approach in the leisure sector and incorporate a style of mixed reality offering,” notes Kevin Williams. “The use of VR in an escape room location was seen from a number of small start-ups, but it was the investment that VRStudios achieved through their partnership with Knott’s Berry Farm (Cedar Fair Entertainment) that started the momentum, followed by an investment to have these virtual attractions incorporated on property as equivalents to escape room applications – the Halloween season offering a perfect opportunity for their temporary deployment.
“Regarding actual mixed reality technology in an escape room package,” he continued, “the development of lasermaze experiences has started to migrate into their own mini secondary revenue generators on some sites, while the actual deployment of a completely dedicated mixed reality experience is still being considered. From my perspective, the design teams within the theme park sector are still unsure of the long-term value of this untested new technology and methodology that is the escape room. It is easier to see these rooms as a temporary, seasonal attraction and gauge customer reaction. The use of augmented reality platforms and the latest 3D projection mapping is offering an opportunity to totally change the experiential nature of the more traditional escape environment.” 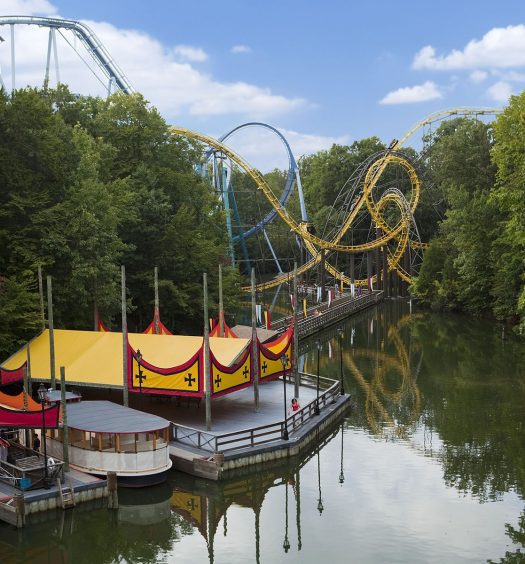 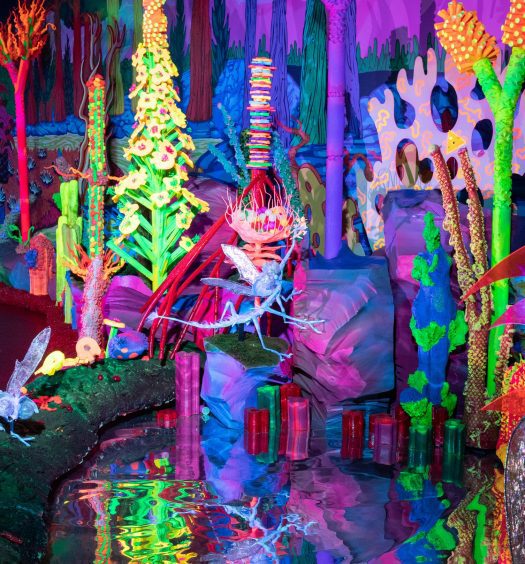