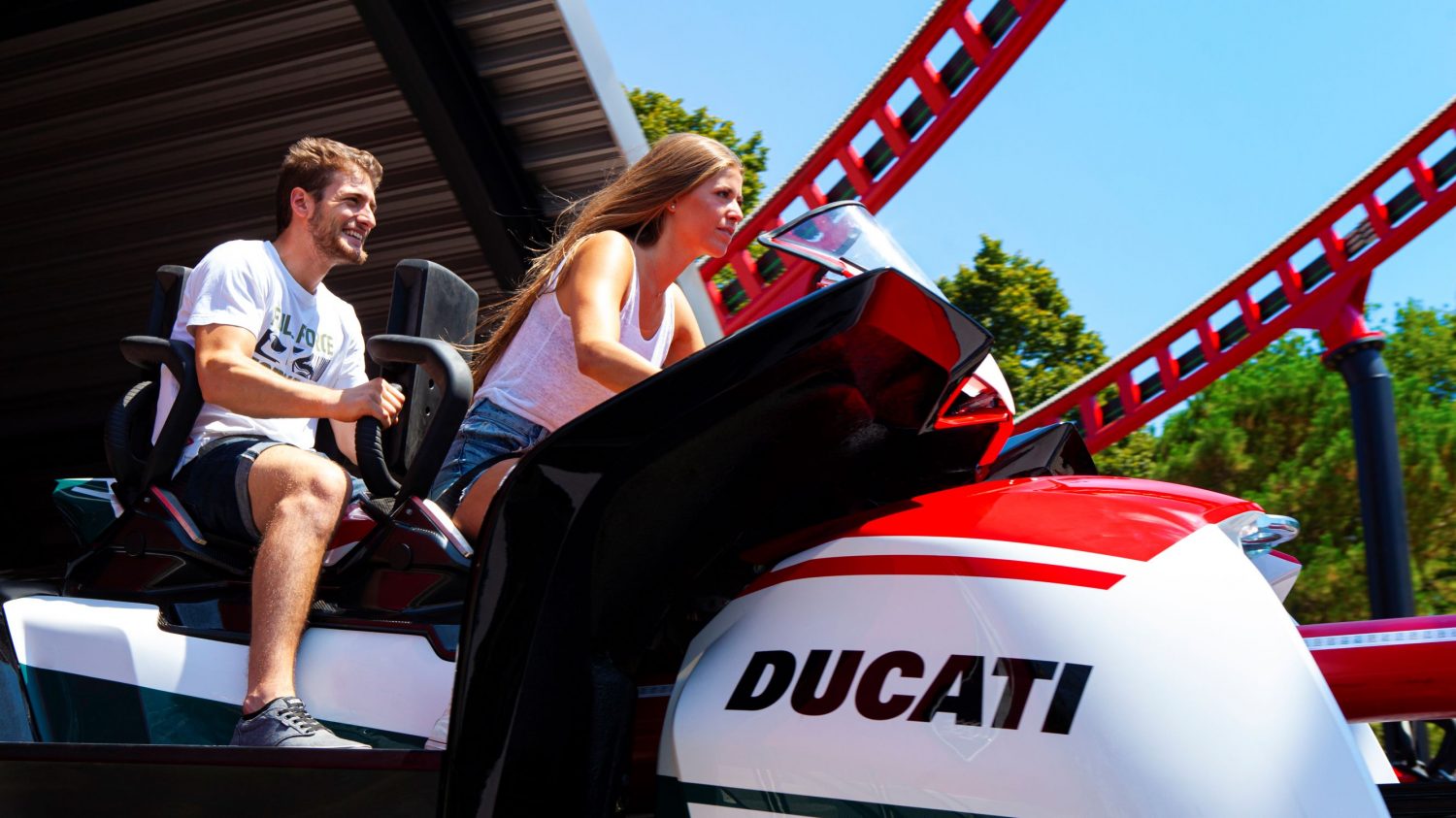 THE world’s first themed area in a theme park dedicated to and inspired by a motorcycle brand, opened at the start of the 2019 season at Mirabilandia in Italy.

Duacati World, a newly created 35,000sq.m area of the park, catapults visitors into the exciting world of motorcycles and motorcycle racing with a range of attractions and facilities for all ages, including the highly impressive and unique roller coaster Desmo Race from Maurer Rides. This centrepiece ride opened a little later than the rest of the area, on July 25, with a special 11pm celebratory event.

Construction of the new area, which represents an investment of €25m ($27.5m), began on July 25, 2018, the decision to add Ducati World to the park being influenced by the fact that “Ducati is a top brand, based in our region and to be part of a bigger community is a great opportunity for our park,” Mirabilandia general manager Riccardo Marcante told InterPark.

Marcante also explained that the area was designed “in order to let the entire family experience the typical Ducati fun and adrenaline.” The first elements to open included the Diavel Ring, a round ride from SBF Rides which offers younger visitors the chance to experience drifts and screeching rubber, as if they are in a drift race. It is an attraction for children who want to challenge themselves shifting gears and applying brakes to tame their own Diavel. 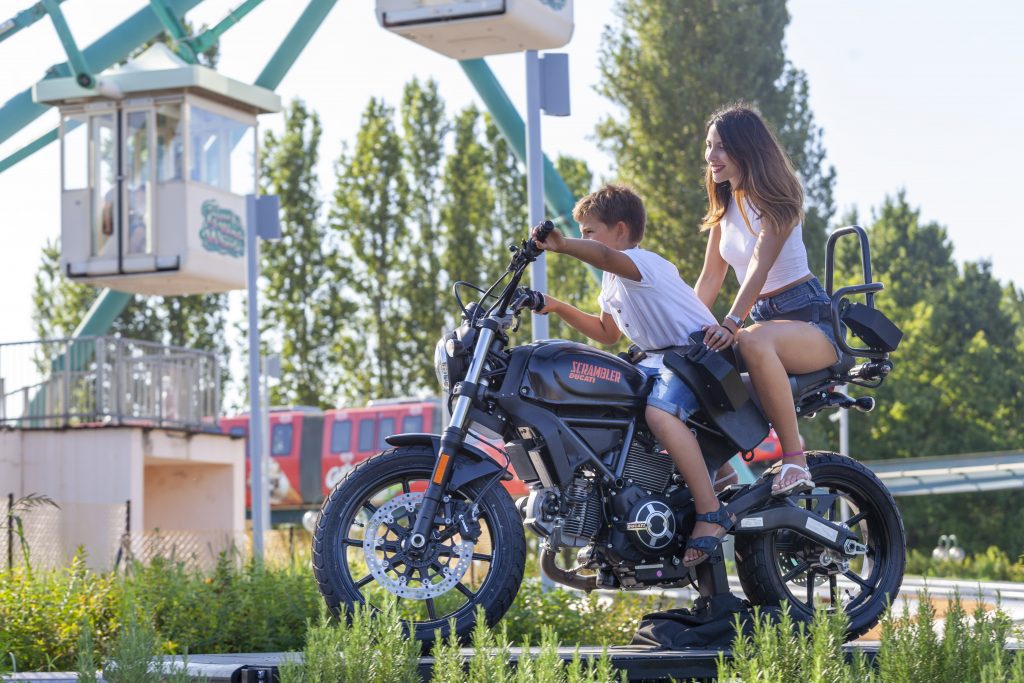 Also from SBF is the Kiddy Monster, inspired by one of the most iconic Ducati models. This allows children to ride a motorcycle and “touch the sky,” experiencing the feeling of the wind in their faces while being carried away higher and higher. Additionally, the Scrambler Run, from Preston & Barbieri, is a track ride on two-seater scrambler bikes inspired by the well-known Scrambler Ducati, a name synonymous with 1960s and 1970s freedom.

The front fairing of the Panigale V4 Ducati is the evocative entrance of the Experience Building, home to cutting-edge simulators and where Ducati fans can find the company’s most famous models on permanent display.

Two state-of-the-art simulators called Motion Spheres provide guests with a three-dimensional riding experience akin to that of a real rider. Advanced devices, high technology and mechanics combine for an immersive experience, complemented by captivating sound effects and a wind tunnel capable of simulating the wind’s realistic effects as visitors sit on a Ducati motorcycle looking into a dome screen. The manufacturer of the simulators was Motion Sphere, which has been operating in the US, Brazilian and European markets since 2014. The realism of the video images used was developed by the Milestone company in Milan, one of the most famous and successful publishers in the world of racing, which used aerial photography and drone-scanning to faithfully reproduce the environments and details of the tracks for an unforgettable game experience. 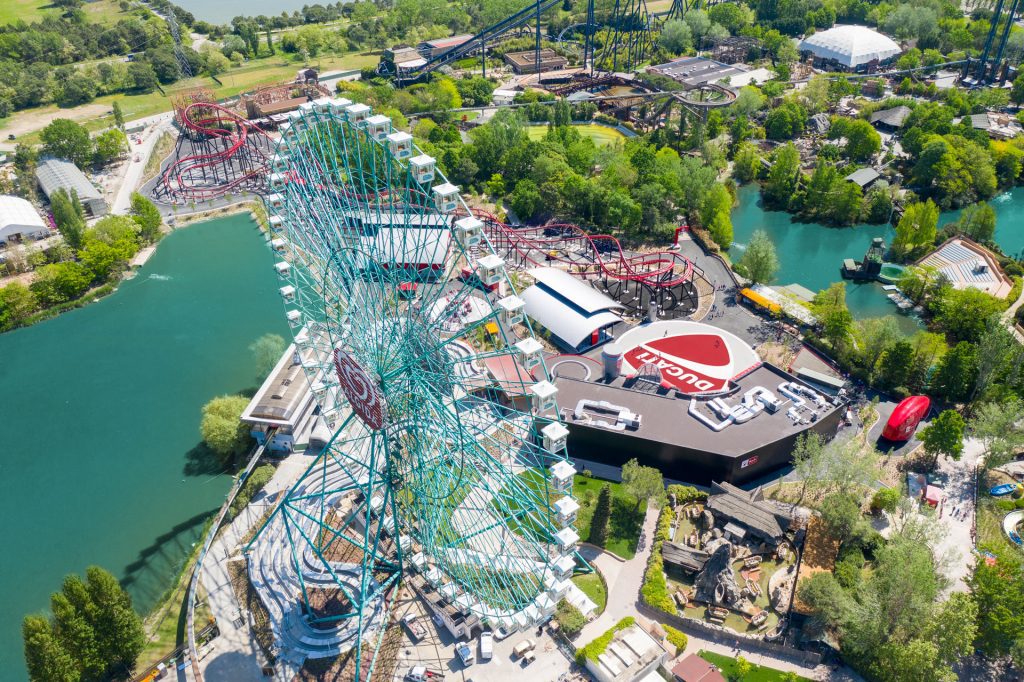 “To complete the offer within the Experience Building there is an official store, the Ducati Shop, with customised gadgets and merchandising,” says Marcante. “For a tasty break between one fun experience and another, three snack points will satisfy every taste and need – the Paddock Café, Pit Stop and Scrambler BBQ.”

As mentioned, the centrepiece attraction is the Maurer Rides-built Desmo Racer, an attraction based on the company’s Spike coaster system.

The interactive, double track, duelling coaster is a world first on which passengers race on two parallel tracks as if they were in a World Superbike race. Riders sit on Ducati Panigale V4 based coaster vehicles which have their own drive systems and by operating a throttle grip, guests can determine how fast they want to accelerate and travel. 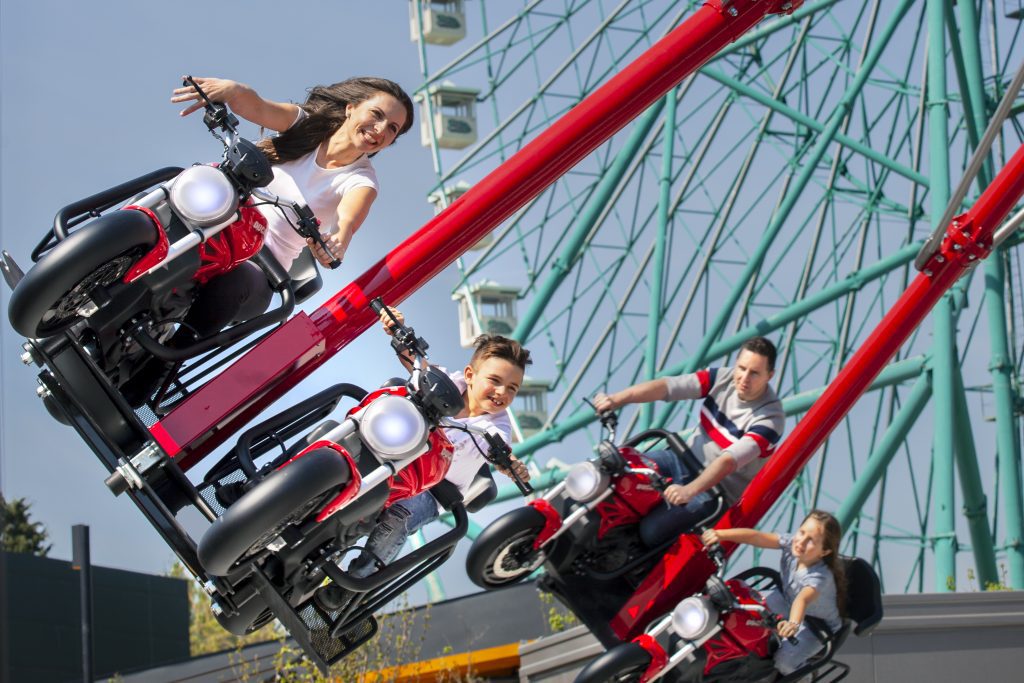 Once riders are aboard the coaster bikes in the station the vehicles stop briefly at a traffic light and when this turns to green, riders use the throttle twist, as on a real motorbike, to launch the vehicle forward with 1.2g. They then go into a right-left combination in which the vehicles cross over each other and past the queuing area before being challenged to the extreme in a 270° turn. They can then accelerate out of the bend again in order to lie down fully in the long stretches of the course.

A jump-like camelback over the station is followed by an even higher hump over the monorail and a series of narrow, winding curves, before riders climb up 22m (72ft) with maximum inclination and plunge back down into a valley shortly afterwards. The track then takes riders along the bank of a lake before they enter a narrow chicane under the monorail followed by the home straight heading for the chequered flag.

The track length of Desmo Racer is 525m (1,722ft) x two and the maximum rail height is 22m (72ft). A total of 12, two-seater vehicles are used and hourly capacity is 1,000. On this example of the ride the Spike vehicles have been complemented by original components from the Ducati Panigale V4. The front with its striking lights, fuel tank, windscreen and tail lights have all been faithfully reproduced and integrated into the design of the rider vehicles, with elements such as the display and lights being fully functional. Additionally, a sound generator provides the full Ducati sound when accelerating to create a truly realistic overall experience.

So what makes it such a special ride? 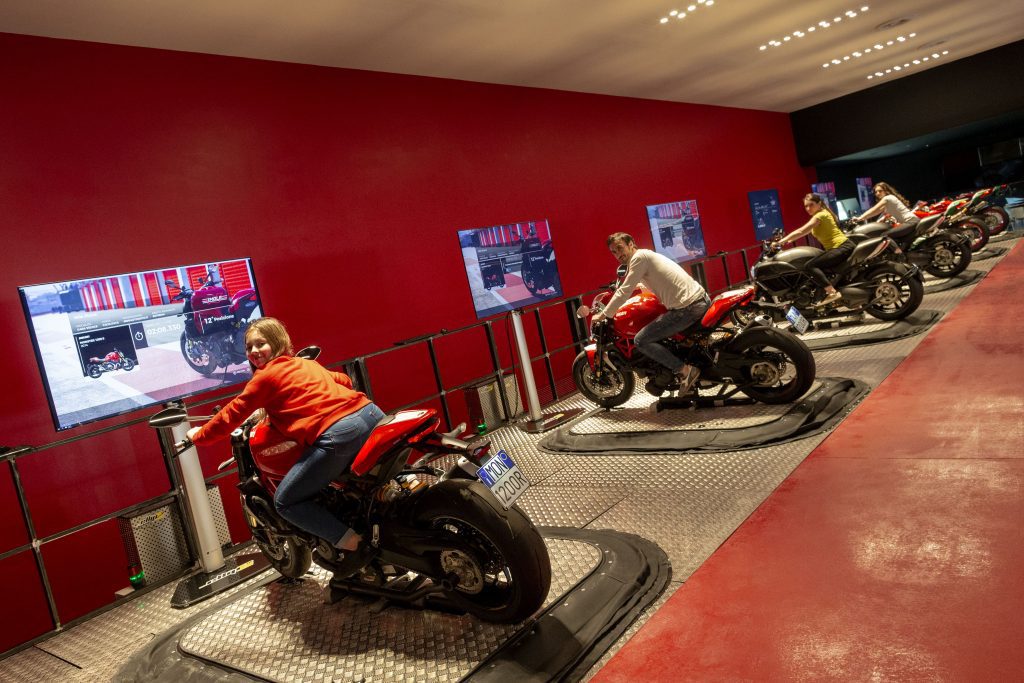 “Desmo Race is the first interactive double-track dueling coaster,” says Marcante. “On a two-seat motorcycle – which simulates driving a V4 Panigale – it is possible to challenge each other along two parallel tracks for a head-to-head race. Braking and accelerating are in the driver’s hands, who has to face every turn taming the rumbling engine. Everyone has the opportunity to feel like a real racer (minimum age six-years-old and minimum height 120cm) and can experience the thrill of a motorbike race. Maurer provided a unique coaster, a prototype which is possible to enjoy only here.”

And what does the area bring to the park that it didn’t have previously?

“Not only was the area unused but now the park can be known also outside the usual audience to whom we refer,” said Marcante, who added: “Desmo Race is a world-unique coaster, not only for its technical characteristics but especially for the emotions it gives to the public. We could have chosen a longer and higher coaster, but instead we chose an attraction which allows children and adults to have fun in the same way as if they were riding a Ducati. In other words, it is just as we have always said – you will not have to wait to grow up.” 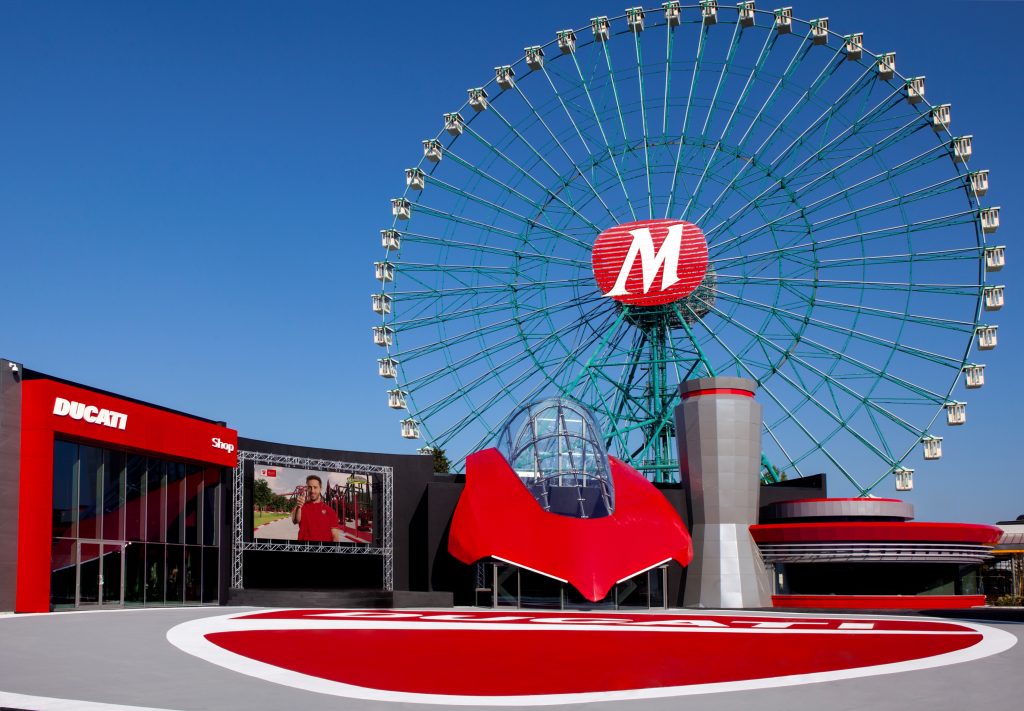 Ducati World at a glance

All attractions and facilities themed on the Ducati brand 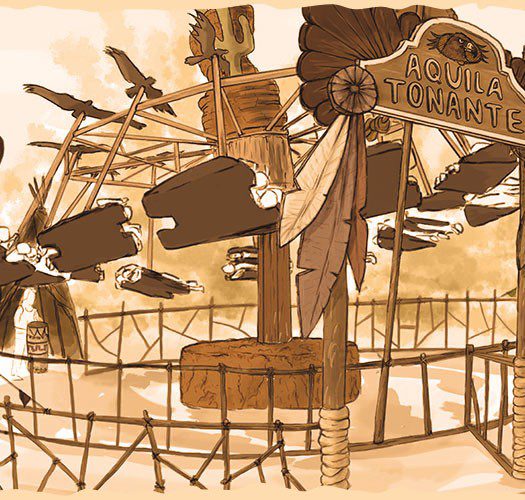 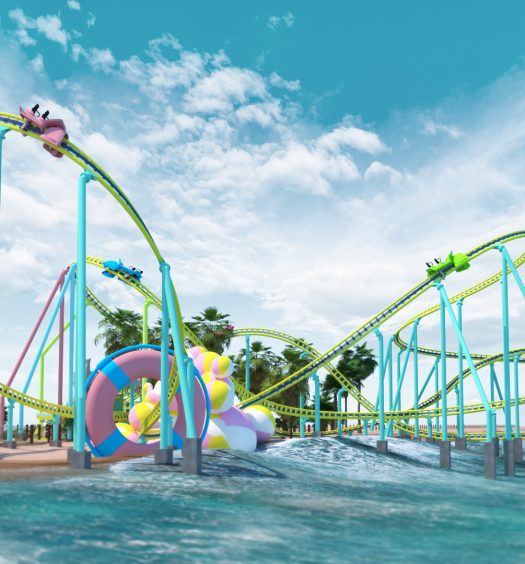