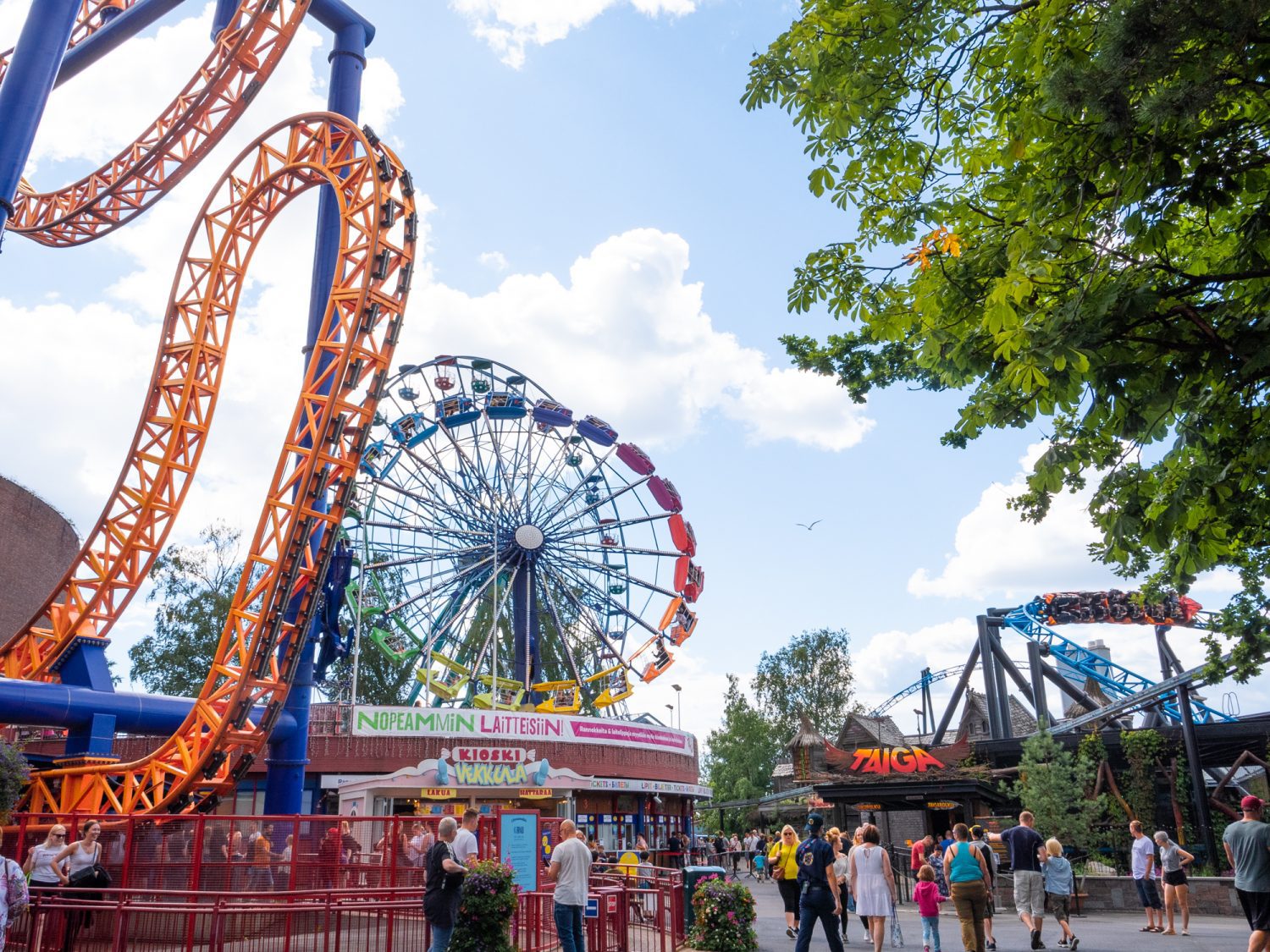 Linnanmäki is Finland’s oldest and most popular amusement park, located in the capital city of Helsinki. Owned and operated by the non-profit Children’s Day Foundation, the park opened its gates over 70 years ago in 1950 and has been attracting guests looking for fun ever since. 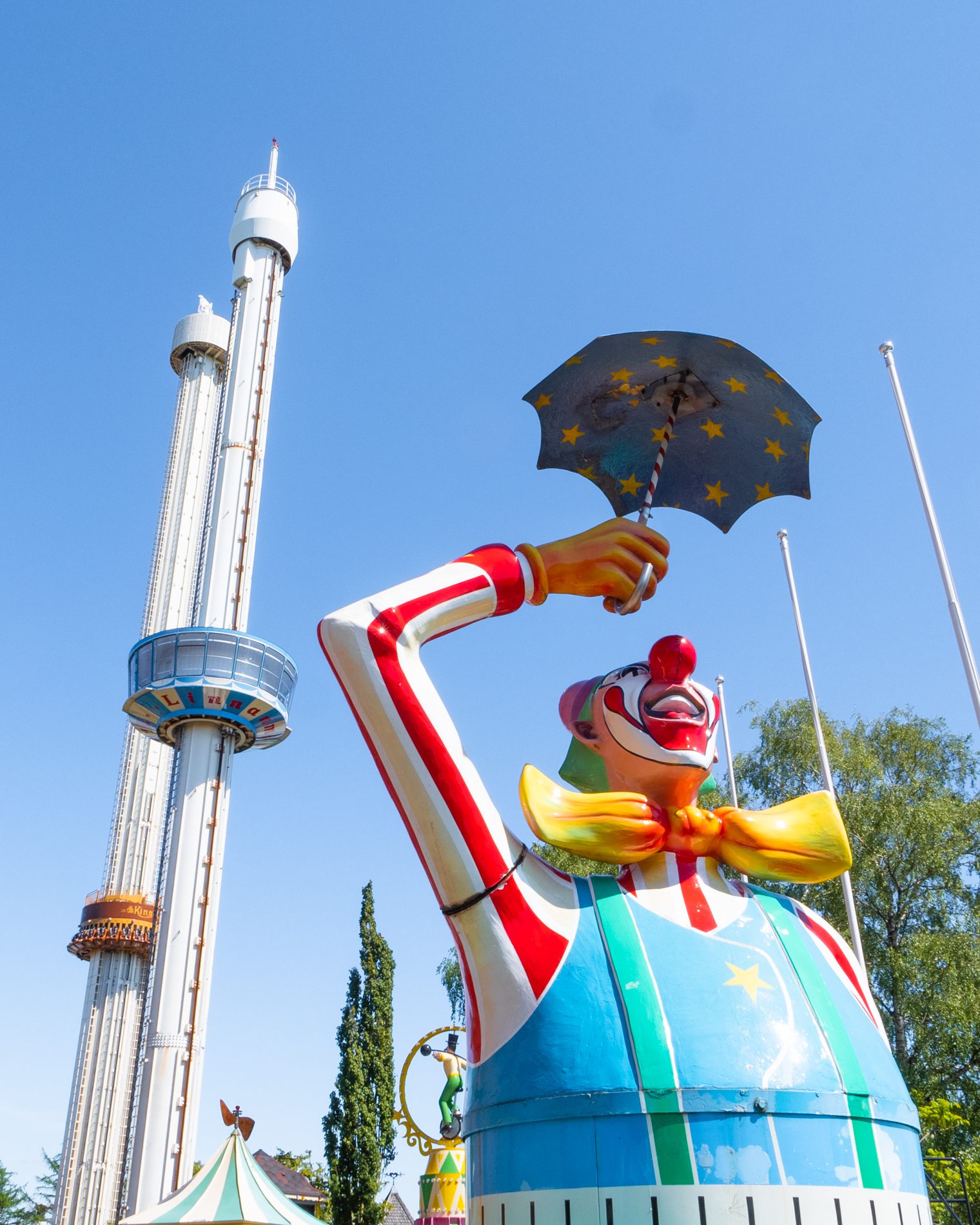 The park was established all those years ago by six charity organisations, Barnavårdsföreningen i Finland, (Finland’s longest running child welfare organisation); The Federation of Mother and Child Homes and Shelters; The Central Union for Child Welfare; Parasta Lapsille and Save the Children, with the aim of raising money for Finnish child welfare funds. Over the course of its operation, the park has donated more than €120m to this very important cause. 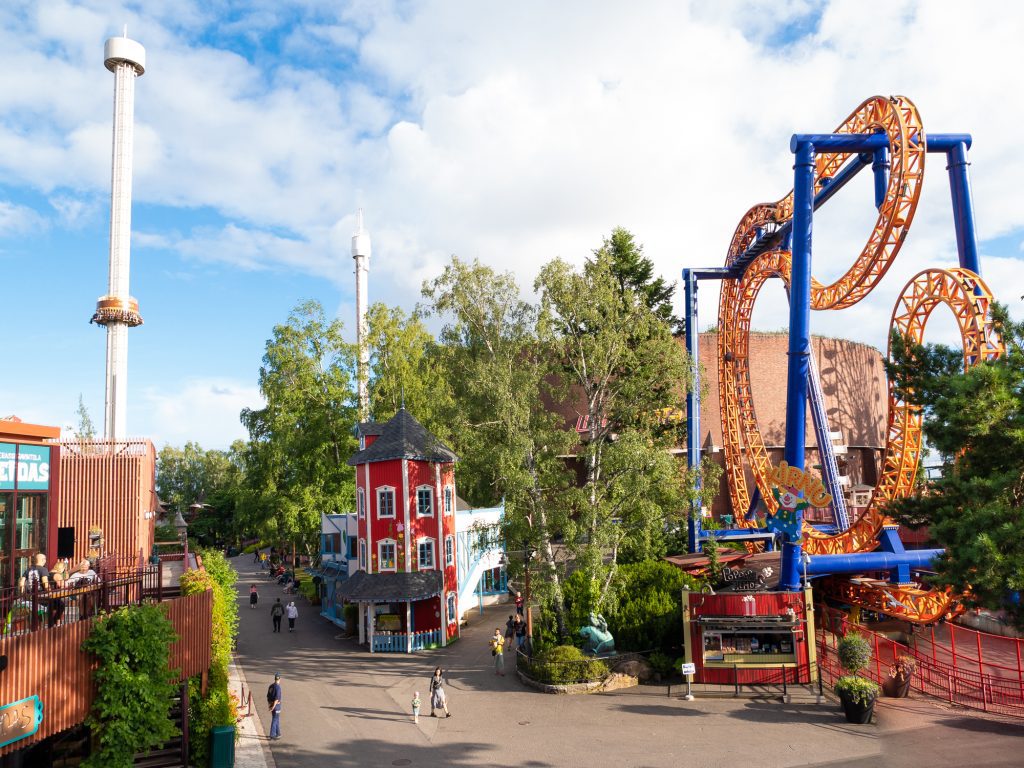 Built on a hill, the park derives its name from Vesilinnanmäki, which, in Finnish, translates to Water Castle Hill, which is the name locals gave to the hilly area in the early 20th century since it has two water towers, built in 1876 and 1938. The water towers are no longer in their original use and because of the zoning plan of the city they are not allowed to be demolished. Currently one of the water towers houses an indoor roller coaster (Linnunrata eXtra), that offers VR-glasses with three different contents for the ride. The other water tower is used as a technical maintenance hall.

Linnanmäki currently holds over 40 rides with something for everyone, including colourful carousels for children, fun attractions for families to enjoy together, as well as thrilling rides for adrenaline seekers. Some of the 40 rides at the park include the children’s ride Helikopteri, a ride which lets small guests experience a smooth ascent into the skies while spinning. Whoever is sat in the front seat can also pilot the gondola during the ride, getting great views right across Alppiharju, the sub-district in which the park exists. 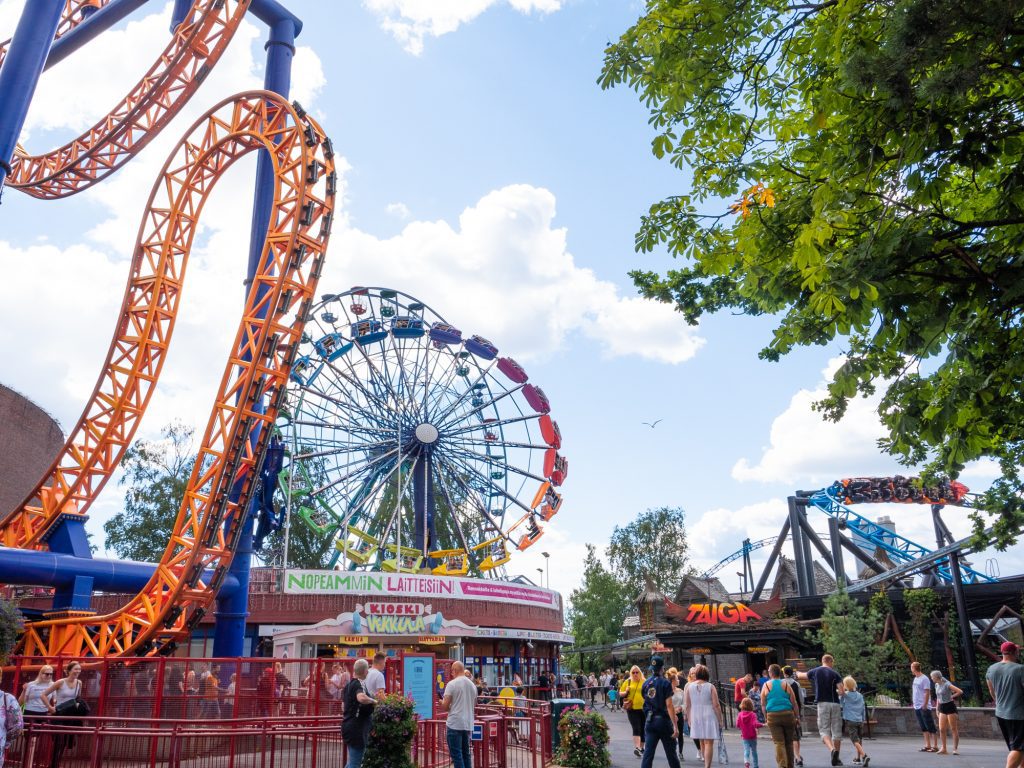 There is also HipHop, which lifts riders to a height of eight-metres, the Kammokuja a terrifying 3D experience, and the park’s signature, wooden roller coaster ride, Vuoristorata, that has delighted visitors ever since it opened back in 1951. The ride still employs traditional brake masters controlling the speed while standing in the last carriage – which in today’s modern world is quite the rarity on roller coasters. 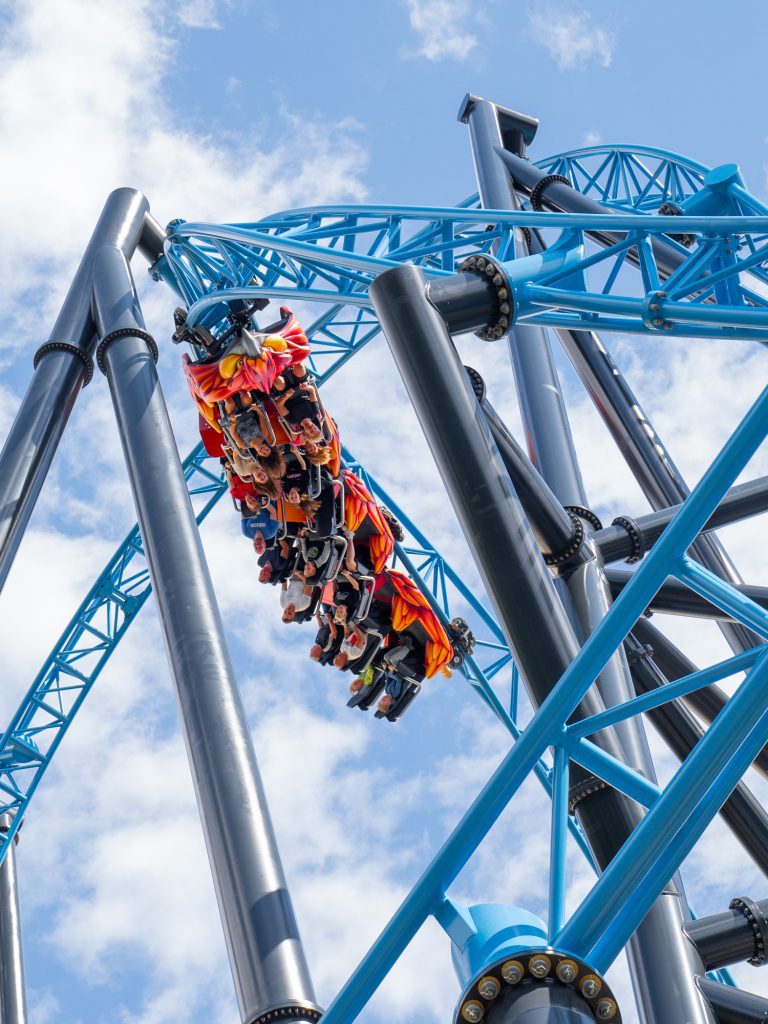 Another significant, signature ride and one of the newest at the park, is the Intamin double launch coaster, Taiga, which opened in 2019. Taiga is a terrific ride that launches twice and sees guests upside down four times per ride. The top speed of this attraction is 106 km/h, and it really plays with the feeling of weightlessness. The ride was specifically designed for Linnanmäki, and, in its opening year, Taiga won several awards, including Europe’s Best New Coaster by European Star Award.

Linnanmäki works with various manufacturers for its rides, including: Intamin, Mack, Huss, Moser Rides, Technical Park, Zamperla, Maurer, S&S Worldwide, Gosetto, and Zierer. Constantly working on its ride line-up, Linnanmäki aims to develop the amusement park every year, with new additions revealed only ahead of each season.

Within the gates of Linnanmäki there is also a Sea Life centre and the second largest theatre in the country, the Peacock Theatre, both operating all year round. The Sea Life Centre is a fun place to discover fascinating underwater worlds that are home to tropical fish and starfish, as well as sharks and rays.

The exhibitions held at the Sea Life centre present many species whose environments are threatened by pollution and other environmental damage, with the Helsinki branch also being part of the pan-European Sea Life aquarium chain. The aim is to educate visitors about the need for protecting the sea environment. 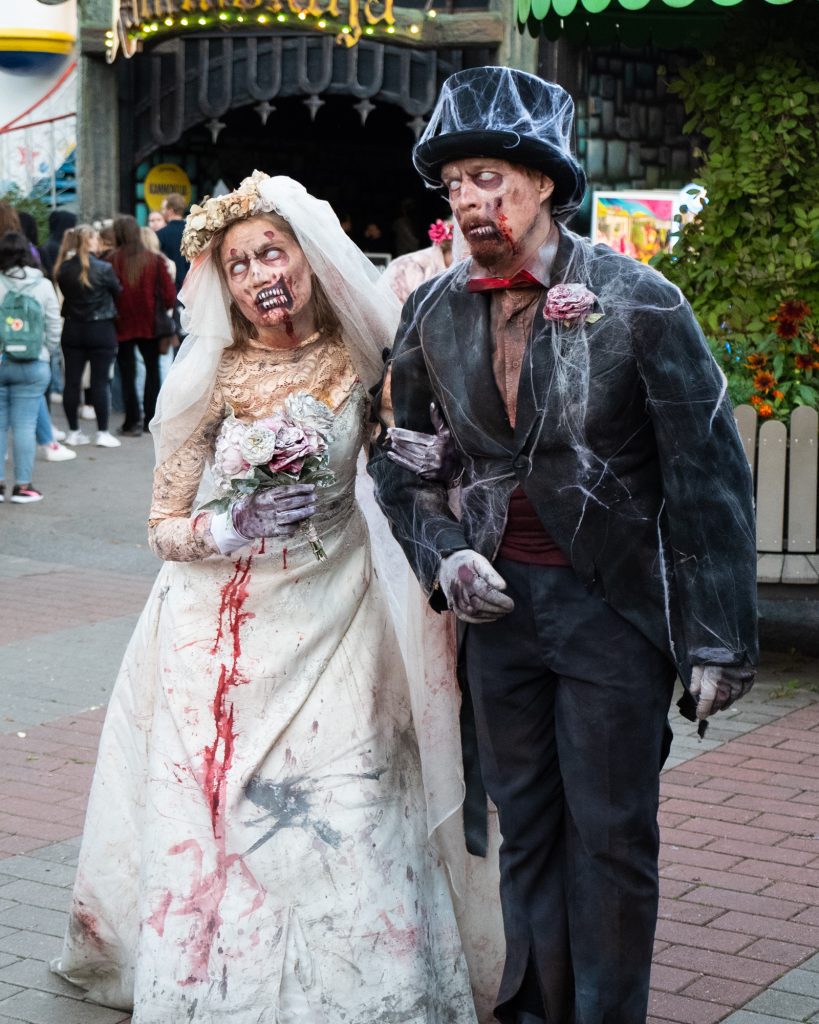 The Peacock Theatre holds a selection of eclectic, entertaining performances that cater for all in the family and is one of the main stages of the Finnish Comedy Theater in Helsinki, offering performances in various forms since the amusement park opened. The mission of the theatre is to create high-quality, diverse and relevant cultural experiences for audiences of all ages, both current and timeless, in a comedic and entertaining form. Through its activities, the theatre promotes the well-being of the widest possible audience and is thereby involved in building a better society.

Alongside the rides and various entertainment options, Linnanmäki also offers special events throughout the year, such as the unique ‘iik!week’ horror festival in September, which sees the park filled with zombies and other scary characters that aim to terrify guests in and out of the eight different live haunted houses. The season then ends in October with the popular Carnival of Light where the amusement park is lit with unique light installations and other exciting immersive elements. 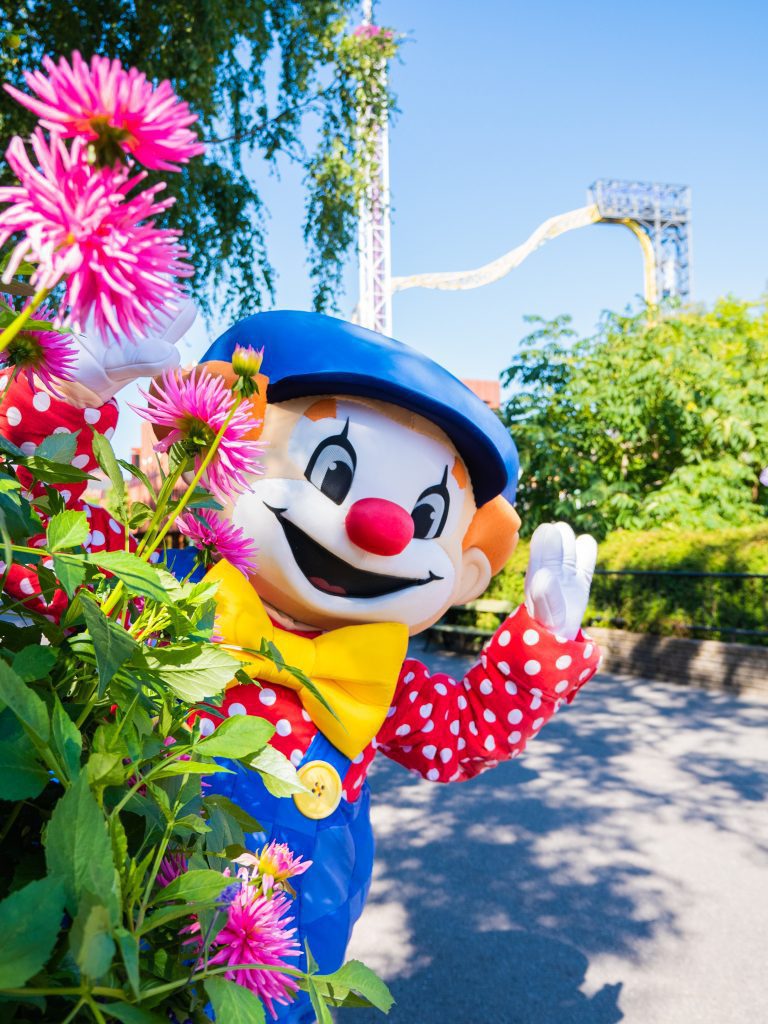 Ample F&B offerings at a park are just as important as the entertainment and at Linnanmäki the options are extensive, something new to try introduced every year. The park also ensures that it offers treats for different dietary restrictions, such as gluten-free and lifestyle choices, such as the growing popularity in a vegan diet. There are five restaurants and 2 cafes, as well as several concession stands where guests can choose from a wide selection of F&B options including: pizza; Asian wok dishes; Linnanmäki’s famous twirled french fries; and its special sour candy floss. And when it gets to the summer months, the Keidas terrace restaurant in the centre of the park comes alive with music, while serving thirst-quenchers and treats perfect to enjoy in the summer sun.

Open six months of the year from April to October, Linnanmäki attracts around 1.2 million visitors from Finland and neighbouring countries, each year. Employing 70 members of year-round, full-time staff, the park also takes on around 600 seasonal ‘Fun Master’ staff members, over half of which are return employees from previous seasons. Easily accessible by public transport from the centre of Helsinki, there are several hotels within a short walk of the park.

By providing the families of visitors with a fun-filled amusement park that they want to visit time and time again, Linnanmäki has become so much more than somewhere for people to spend their leisure time. For example, thanks to the monetary support through the park’s operations, one of the six Children’s Day Foundation’s charity organisations, Mannerheim League for Child Welfare, has been able to upkeep and develop low-threshold crisis support through digital services for children, teenagers and families in different parts of Finland for more than 70 years, together with nearly 30,000 volunteers. 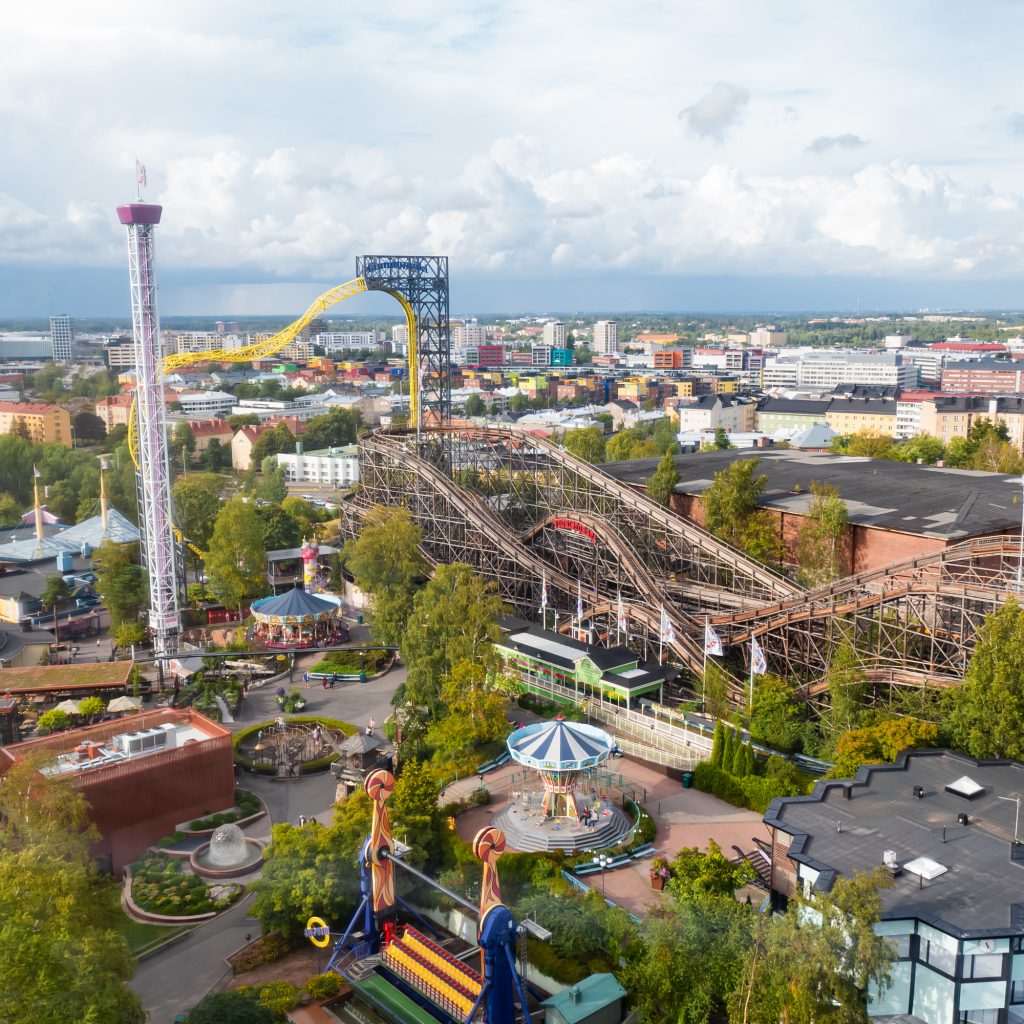 Among Linnanmäki’s main partners are: SOK/HOK Elanto, Unilever Finland and Hartwall. As partners, these companies are supporting the valuable child welfare work with their monetary and marketing contributions. A socially responsible park, as Ulla Siimes, executive director at The Central Union for Child Welfare, another of the six Children’s Day Foundation’s charity organisations, puts it: “I can confidently say that Linnanmäki may be one of the most responsible amusement parks in the world. Over the course of the years, so many children and families have gotten help through the donations of Linnanmäki. It has had a massive positive impact on children and families’ rights and welfare. That wouldn’t be possible without Linnanmäki’s determination for improving the park year after year.

“Linnanmäki has taken a lot of other actions in the wider field of responsibility – acting truly in accordance with its values. I hope that Linnanmäki remains the lovable, responsible amusement park that so many children and parents choose as their number one summer holiday destination.”

Over €120m donated to charity 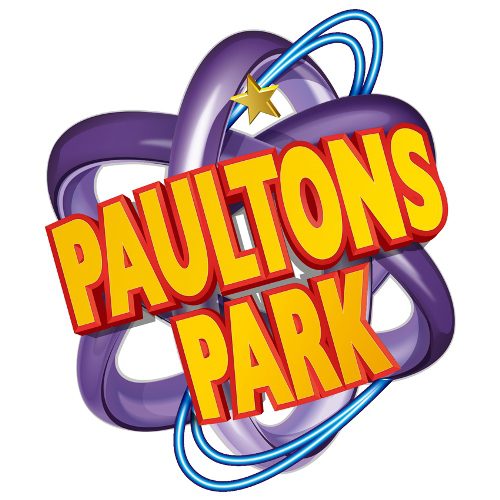