Gröna Lund has opened a new attraction. Monster – King of Roller Coasters is dubbed as the Swedish theme park’s greatest attraction ever.

The roller coaster was manufactured by Bolliger & Mabillard. The custom-designed, never-seen-before steel coaster sends guests hurtling across the theme park, reaching speeds of up to 90 km/h and experiencing a series of near-miss moments.

Monster is part of Gröna Lund’s newly refurbished area. Work on the most extensive construction in the theme park’s history began in 2017. The new waterfront boardwalk and the world-class roller coaster were due to open in 2020 but were delayed because of the Covid-19 pandemic.

In June 2021, the Swedish Public Health Authority gave the opening of amusement parks the thumbs up and the premiere of Monster took place.

Johan Tidstrand, owner of Gröna Lund, spoke of the opening of the new roller coaster: “We’ve travelled the world for years visiting different amusement parks and trying out hundreds of roller coasters. That’s why we proudly, and without exaggerating, can say that Stockholm has now got a world class roller coaster with the premiere of Monster”

Peter Osbeck, senior ride manager at Gröna Lund, described what Monster entails: “34 meters up, at the top of the lift hill, the first drop will plunge riders towards the water at 90 kilometres per hour. Riders will be upside down no less than four times as Monster soars above Gröna Lund, passing both the Fun House and our Zac-spin coaster Insane,” said Osbeck. 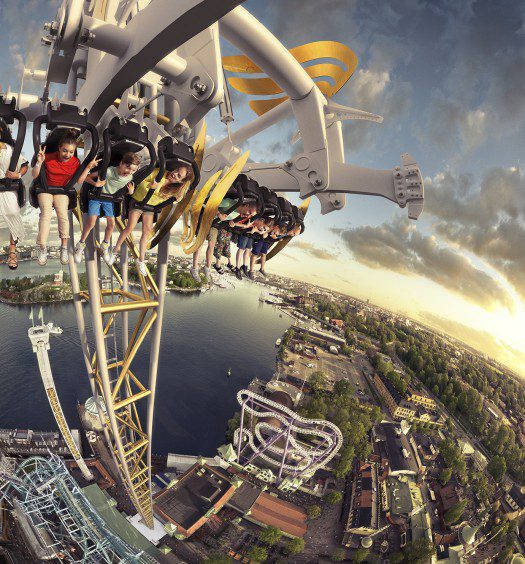