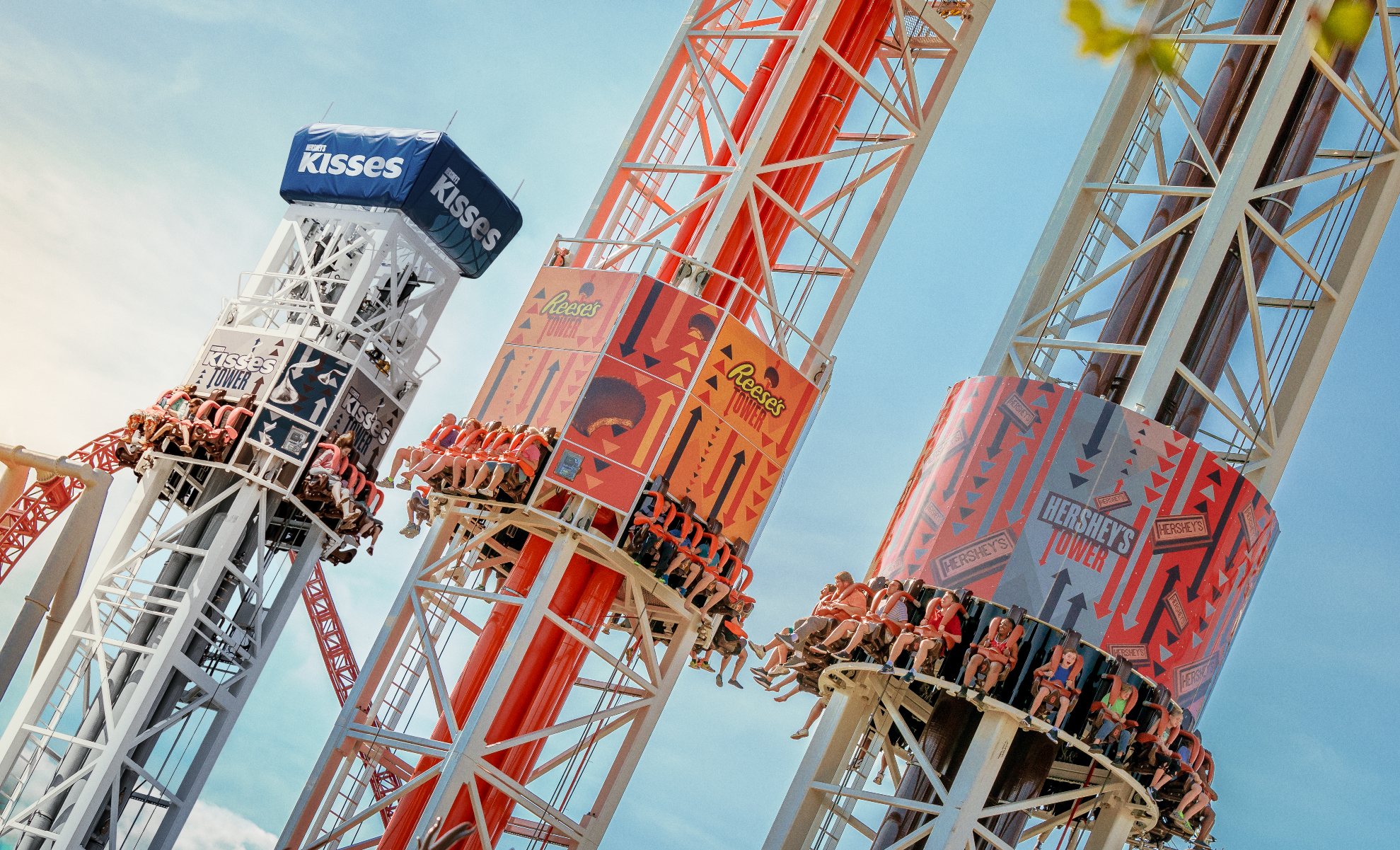 S&S WORLDWIDE as it is known today began life in 1994 as S&S Sports Power Inc., when Gene Mulvihill and Buddy Koffman (B & G Management LLC) became joint owners with Stan and Sandy Checketts following their capital investment in the company.

The first attraction to be developed was the Space Shot tower ride which used a compressed air system to launch passengers vertically up a 180ft. steel lattice tower. The pneumatic system was patented and the first Space Shot tower rides were sold to amusement parks in Winsconsin Dells, US, Tusutsu Report in Hokkaido, Japan and Mexico City. 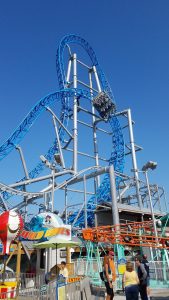 The following year, with the company now named S&S Original Amusements Inc., the Frog Hopper kiddie ride was introduced as an attraction that would give young children a thrill experience similar to the vertical tower rides on offer. Since then over 250 frog Hoppers have been sold to customers around the world.

1996 saw the introduction of a downward launched version of the Space Shot, the Turbo Drop, while in the same year the company, now known as S&S Sports Power Inc., took on the challenge of installing an example of its 180ft. Space Shot tower ride on top of the Stratosphere Tower in Las Vegas, Nevada. The Big Shot, as this ride is known, became one of the most iconic amusement rides in the world and opened up some excellent sales opportunities for S&S. Indeed, the ride was recognised by Forbes Magazine in 2001 as the “best adrenaline rush on the planet.”

During mid-1998 a major investor came on board with the purchase of 80 per cent of the company by Crates Thompson Capital of Fort Worth, Texas. Now called S&S Power Inc., the business also built a new main building at its North Logan location. In the same year it developed its next tower ride in the shape of the Double Shot, which combined both upward and downward launch experiences on a single, shorter tower ride.

The current name of the company, S&S Worldwide Inc., was introduced in 2000 and a year later it developed a way to apply the air launch technology to roller coasters. The first air launched coaster in the world was introduced next to the company’s factory in North Logan, the prototype version being sold to Paramount amusement park in Virginia and being recognised by the IAAPA as the Major Amusement Ride of the Year in 2001. 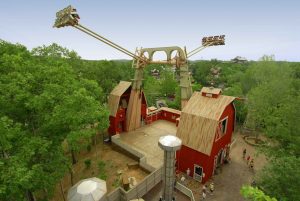 It was in 2002 that the well-known coaster manufacturer Arrow Dynamics, based in Clearfield, Utah, went into bankruptcy and S&S was able to purchase the company and assume its part sales business, long with its ride patents and intellectual property. The 4th Dimension ‘X’ coaster, designed by Arrow, was also acquired by S&S and along with other coaters from the company garnered much publicity and media attention. 2002 also brought the achievement of the opening of the Dodonpa air- launched coaster at Fujikyu Highlands in Japan. This coaster was recognised by the Guinness Book of World Records as the “Fastest Roller Coaster in the World” and was the first coaster ever to achieve more than 100 mph, with its launch speed of 107 mph in less than two seconds.

In 2004, S&S debuted and began sales of its newest ride, the Screamin’ Swing, which used the patented air launch system to swing passengers as high as 110ft. at over 60mph. The ride was a big success and 24 examples were sold during the following few years.

New investment partners became involved in the company in 2006, in the shape of B & G Management LLC and HSK Funding Inc., this assisting with on-going development efforts. Among these, two years later, was an entirely new design in roller coasters, the El Loco which pushes the limits of what can be accomplished in a small footprint. The family-friendly coaster offers a steep first drop, barrel rolls, a smooth track, a 45° outwardly banked turn and a high hourly capacity. The first example debuted at Indiana Beach.

A year later the company introduced a new coaster concept in the shape of the  Free Fly Coaster, which debuted at Skara Sommarland in Sweden, while also that year a new investment group, Larsen MacColl Partners LP acquired a majority interest in the company, including the ownership formerly held by founder Stan Checketts.

By 2011, with the amusement industry’s move toward rides that were “higher and faster,” the S&S air-launched coaster evolved.  A standard, 80 mph extreme thrill version was produced and sold (primarily in the China market) and the company also built a 120+ mph version for the Nürburgring race track in Germany. Also later in the year, Sansei Technologies Inc. of Osaka, Japan, began acquiring interest in S&S.

A year later the company introduced one of its most successful coaster designs to date, the 4D Free Spin. This ride, which opened initially at Six Flags in San Antonio, Texas, became so popular that production capabilities for the attraction soon sold out for several years in advance.

By late 2014, Sansei Technologies Inc. had become the sole owner of S&S Worldwide Inc., the acquisition bringing great financial stability and many decades of manufacturing expertise to the well-established and innovation of S&S, and today, still based in North Logan, the company is the largest manufacturer of roller coasters and major amusement rides in the US. Reflecting this, construction of a new manufacturing and administrative facility was completed in April 2018

in Logan, the new high tech, 110,000sq. ft. building design being centred around safety, efficiency and the comfort of employees. The building itself has multiple open collaborative areas that contain state-of-the-art conferencing equipment which allows for enhanced meeting experiences, while its 82,000sq. ft. of production space enables S&S to create higher quality production flows to ensure faster and more resourceful completion of products. 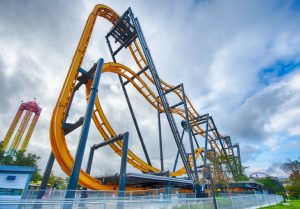 IP: What was the first attraction ever built by S&S? Can you describe this, who the owner was and where it was operated?

TT: The first attraction built by S&S was in the year 1995 and it was a Space Shot in Mexico City, Mexico, at El Nuevo Reino Aventura.

IP: Is this ride still in operation today?

IP: What significant new concepts has S&S developed over the years and what does the future hold in relation to new developments for the company?

MS: S&S has always had a long track record of developing exciting, high thrill rides. With the invention of the 4D Free Spin, several technologies spawned from the development which is driving future “classified” projects.  As always the S&S air launch technology still has a leading edge in cost vs thrill and reliability. This has proven to be true based on the numerous tower rides S&S has installed throughout the world. In addition, the new air launch coaster that will be going into Six Flags Great America was analysed and designed with some of the best engineering minds in the industry. S&S future projects are in the works which are being developed by a dedicated R&D team of engineers and designers. New products coming from S&S will not disappoint. 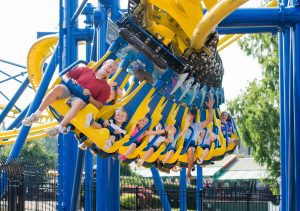 IP: What influences the design of new rides at S&S? Is it mostly the company’s own ideas or do client requirements dictate more what the company produces?

MS: With the formation of a dedicated R&D team, S&S is pushing the designs to places never seen before. It is the intention of the R&D team to put a “new spin” on ideas and products reaching the market. We will also focus on improving our existing technology and using it to drive new products that will leave the industry behind. While it is important to listen to clients and carefully learn what they are looking for, it is the goal of the S&S R&D team to provide new products that the customer didn’t think were possible. S&S is willing to take the risk in pushing technology in order to become the world’s leading ride manufacturer.

IP: Are you seeing any particular trends in the industry at present relating to what operators are looking for in new rides and attractions, and perhaps in particular in the type of attractions supplied by S&S?

TT: I believe there is an increase in immersive experiences and/or dark ride experiences incorporated within ride designs presently. As well, mid-ride launches have become popular. This particular ride enhancement is being included in current proposals S&S is working on.

IP: Do ride manufacturers face any specific challenges at the moment, both in the US and globally? TT: Certainly the trade war and tariffs and the effects both have had on global economies have had a tremendous impact on not only manufacturers, but also on projects in development. 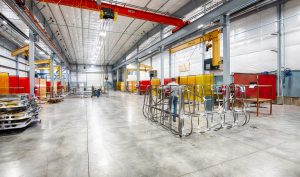 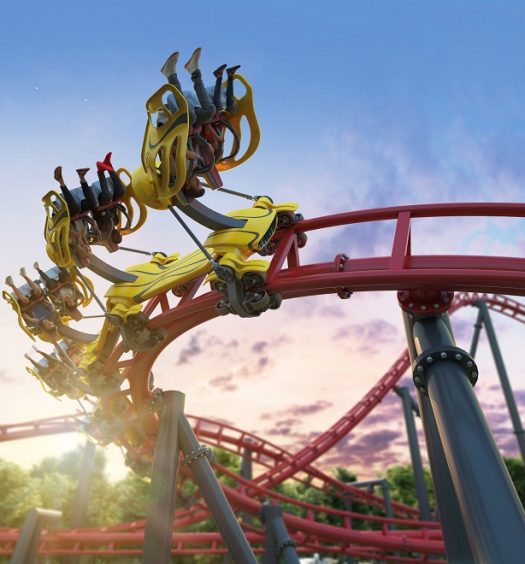 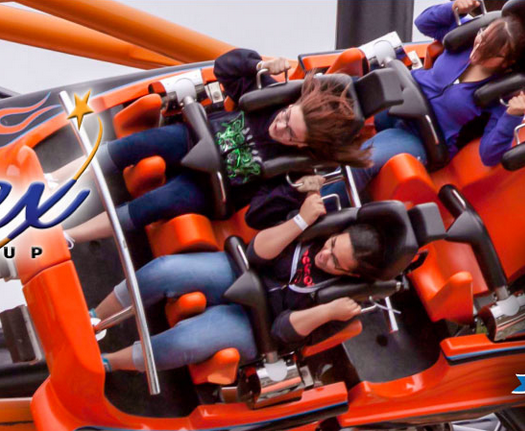