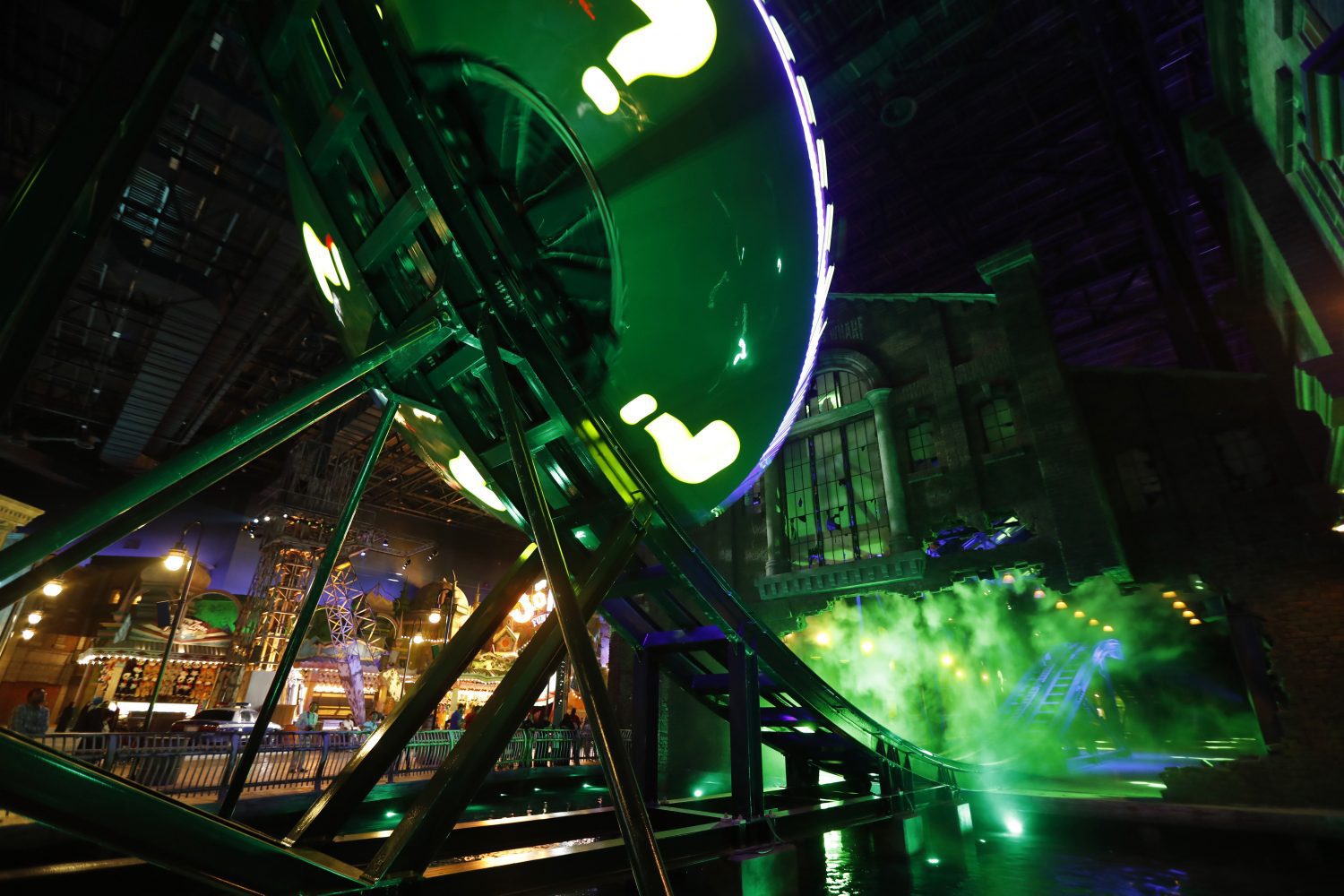 The latest addition to the mix is the world’s first ever Warner Bros. branded indoor theme park and brings to life favourite DC Super Heroes like Batman, Superman and Wonder Woman, alongside well-known animation characters from Looney Tunes and Hanne-Barbera, such as Tom and Jerry, Bugs Bunny, Scooby-Doo and The Flintstones, all under one roof for the first time in the region.

Spanning 1.65m sq. ft, the new park is made up of six immersive lands, which include Warner Bros. Plaza, DC Entertainment’s Metropolis and Gotham City, as well as Warner Bros. Animation’s Cartoon Junction, Bedrock and Dynamite Gulch. O on offer within the different areas are 29 state-of-the-art rides, interactive family-friendly attractions and unique live entertainment. Among these are six show and over 35 DC and Animation live characters, as well as 20 distinctive dining experiences and 22 shopping experiences. 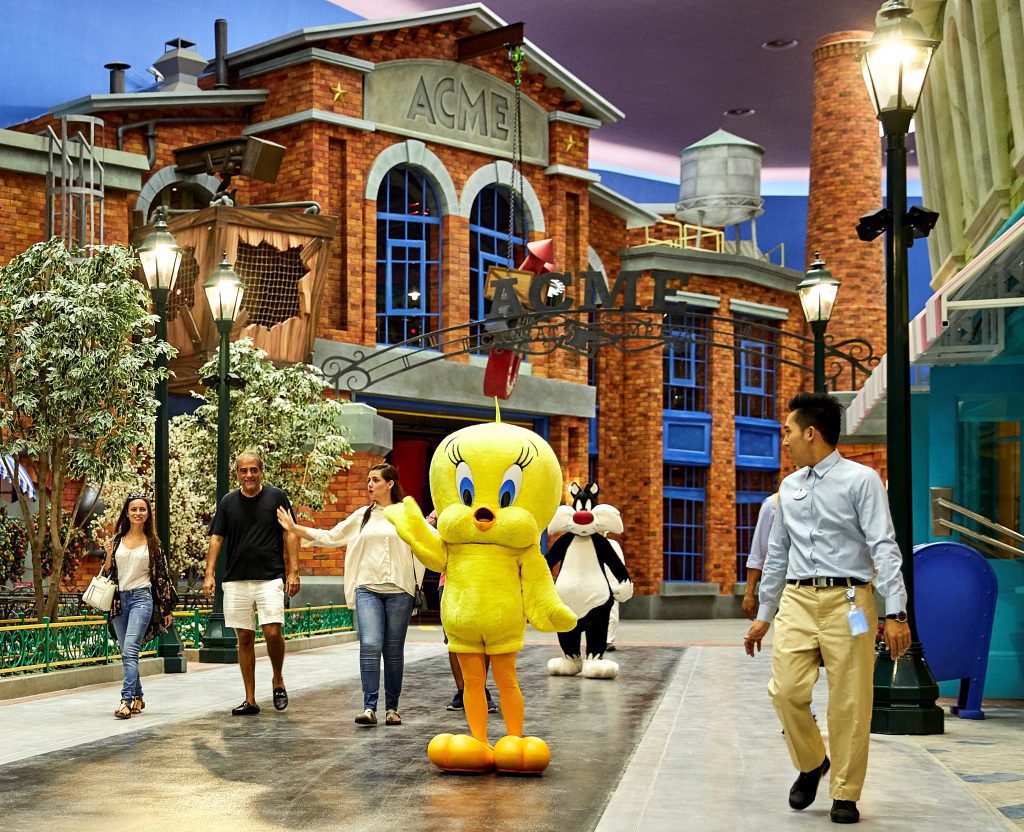 The project developer for the park was Miral Asset Management LLC while the licensing partner is Warner Bros. Consumer Products. Miral’s investment in the venue is estimated at $1bn and is another milestone in the Emirate’s journey to put Yas Island on the global map and become among the world’s leading tourist destinations.

The first area guests come into when entering the park is Warner Bros. Plaza, where art-deco inspired architecture celebrates the Golden Age of Hollywood and all things Warner Bros. Acting as the portal to the rest of the park, the streets of the Plaza are lined with restaurants, cafés and one-of-a-kind themed shopping outlets. Attractions include the Warner Bros. Cinema Spectacular in which theatrical lighting transforms the Plaza from daytime into evening for what is a majestic symphonic celebration that uses projection mapping technology to bring the Warner Bros. film library to life. Hosted by Bugs Bunny, the show is entertaining for the whole family.

The area also offers guests the chance to dine at The Starlight, where they can look forward to a personal visit from all their favourite Warner Bros. and DC characters, the Hollywood Trattoria Italian restaurant, Celebrity Scoop, where sweet indulgences can be had, or the Beverly Hills Boulangerie and Plaza Snacks. Shopping outlets here include Warner Bros. Studio Store, Superstar Souvenirs, the DC Super Heroes Store and Treasures of Hollywood. 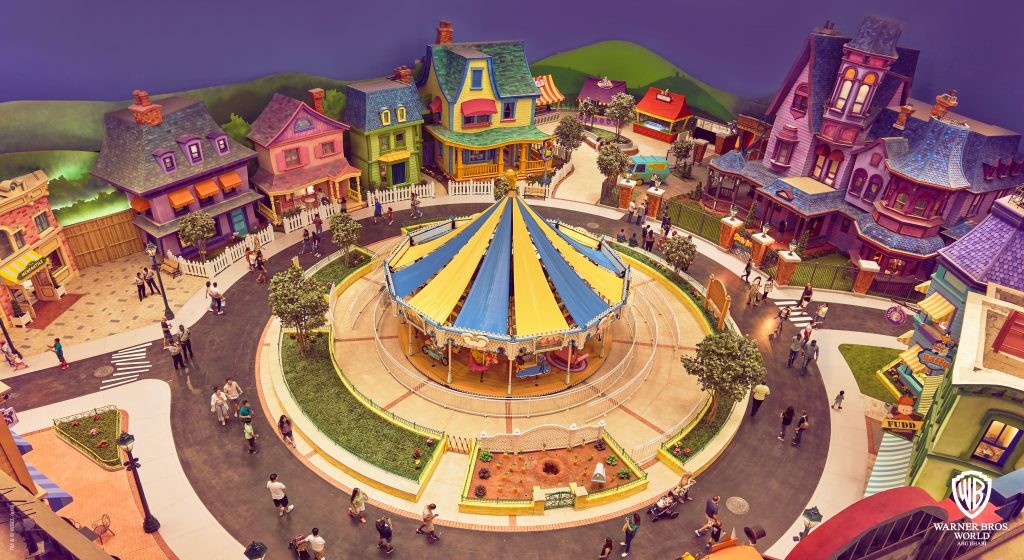 Stepping through the south west transition tunnel from Warner Bros. Plaza, guests get their first glimpse of the “majestic skyline of Metropolis silhouetted against the eternal sunset sky.” The Avenue of Tomorrow curves ahead, lined with shining building facades that stretch up toward the sky. Above and beyond the facades is a sweeping skyline backdrop filled with skyscrapers that bear names such as LexCorp, Queen Industries and S.T.A.R. Labs.

Instrumental scores fill the space, inspiring guests to breathtaking heights throughout their visit to the city. The iconic edifice of the Daily Planet stands directly ahead with a bronze globe that serves as a classic symbol for the media conglomerate.

The gleaming urban cityscape is filled with heroic optimism and is kept safe from villainous activity by Superman and the Super Heroes of the Justice League. The city is home to Superman, Wonder Woman, Aquaman, Green Lantern, The Flash and the Teen Titans. Rides and attractions include Superman 360: Battle for Metropolis – a 360° action spectacular that pits the greatest comic book hero of all time against an alien menace threatening the city. Featuring the Man of Steel, this battle of good versus evil will decide the fate of Metropolis.

Also in this area is Justice League: Warworld Attacks, a dark ride featuring an immersive theatre experience and special effects which rapidly dart, swoop and spin guests amid a colossal clash that teams them with the Justice League in an all-out battle to save the planet.

Green Lantern: Galactic Odyssey is a flying theatre experience that transports guests across the cosmos to extraordinary worlds, enriched with special and visual effects. Teen Titans Training Academy is a multi-level play area featuring a zipline and other physical activities that invite up-and-coming heroes to showcase their skills alongside the legendary Teen Titans. 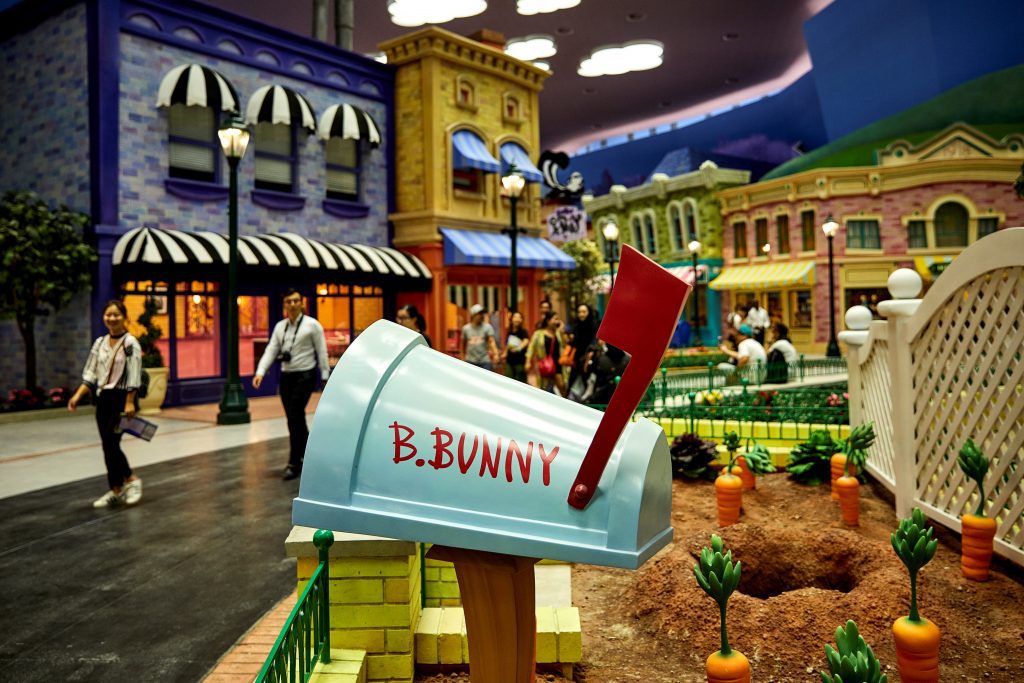 Also in Metropolis, guests can dine at Bibbo Bibbowski’s quick service restaurant, Ace O’ Clubs, as well as Park Ridge Market, while shopping experiences include Zatanna Books and Magical Curiosities and the Justice League Hero Supply Co. Visitors can also feast on savoury snacks from the Daily Planet Newsstand and visit Front Page Photos to appear on the front-page of the famed publication.

Warner Bros.’ most iconic characters and animated worlds can be discovered in Cartoon Junction. Home to animated stars like Bugs Bunny, Tom and Jerry and Scooby-Doo, the area is filled with colour and year-round “sunny skies” created through unique overhead lighting “clouds” in a stylised cartoon sky. Cartoon Junction offers something for everyone, from spinning roller coasters to interactive dark rides, with each attraction putting guests “in the cartoons” in fun and inventive new ways.

Rides and attractions in the area are Ani-Mayhem, a visually immersive and interactive dark ride; ACME Factory, featuring three kid-friendly rides including the Daffy Jet-Propelled Pogo Stick, a vertical “jump” tower ride, the Tweety Wild Wockets round ride and Ricochet Racin’ with Taz, a children’s car ride; Meet Bugs! (And Daffy), where guests can immerse themselves in a one-of-a-kind walkthrough attraction and join Bugs Bunny on stage; Tom and Jerry Swiss Cheese Spin, a family‐friendly spinning coaster from Zamperla; Scooby-Doo The Museum of Mysteries, a family-friendly dark ride; and the Cartoon Junction Carousel, a colourful twist on a classic carousel.

Hungry guests can dine in the area at a variety of outlets, such as the ACME Commissary, Huckleberry Hound Pies, Penelope Pitstop Cotton Candy and Yogi Bear and Boo Boo Ice Cream, while a selection of shopping outlets are also to be found here.

Dynamite Gulch is an animated storyland where guests encounter the famed duo Wile E. Coyote and the Road Runner, while the area is also home to Marvin the Martian, Yosemite Sam and The Jetsons. Rides and attractions featured are Fast & Furry-ous, an Intamin suspended family coaster which takes riders on a journey through desert cactus and chasms joining Wile E. Coyote on yet another pursuit to catch the Road Runner; the Jetson’s Cosmic Orbiter round ride; and  the Marvin The Martian Crater Crashers. Guests can pick up cartoon merchandise at Yosemite Sam Rootin’ Tootin’ Gas, a kitschy, Route 66-themed shop filled with plush toys, drinkware and ride souvenirs. 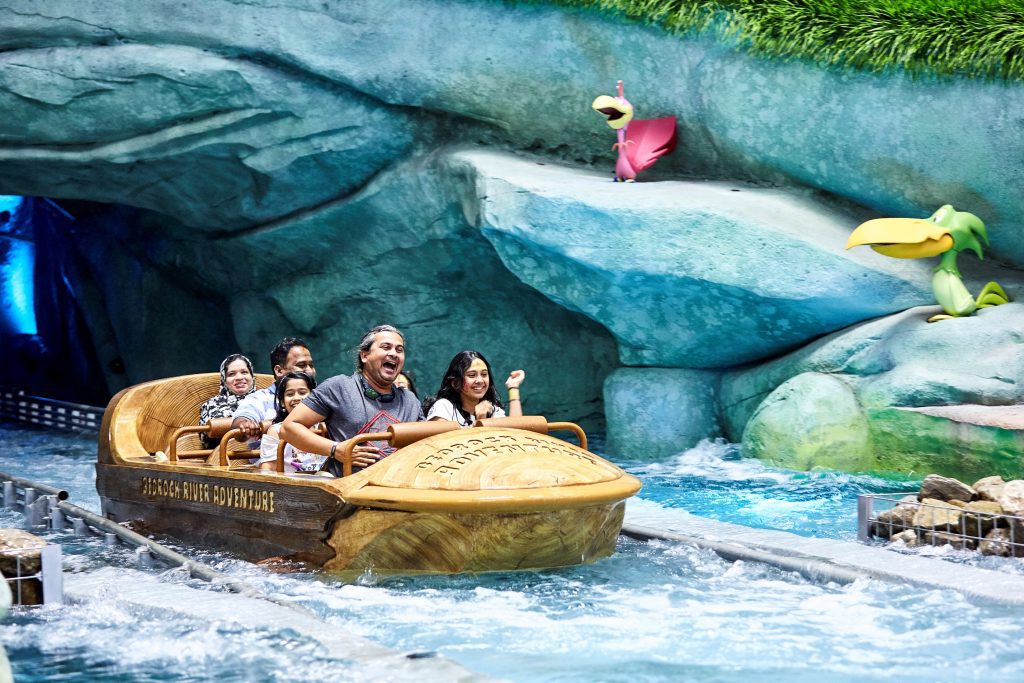 The sixth themed area is Bedrock, home, of course, to The Flintstones and The Rubbles. The main ride here is the Flintstones Bedrock River Adventure, a flume ride which takes passengers on a scenic boat ride through stone-age wetlands, prehistoric neighbourhoods and the city’s picturesque downtown area.

Hungry park-goers can satisfy their caveman cravings at Bronto Burgers and Ribs, or alternatively enjoy a quick stone-age snack at Mammoth Munchies. Souvenirs can be had at the Bedrock Boutique, while the Bedrock Candy Company offers a range of sweets and snacks.

Unfortunately the park doesn’t share visitor numbers but a spokesperson commented to InterPark that it is in no doubt that “a significant number of fans from all over the world will continue to visit Warner Bros. World Abu Dhabi in its inaugural year and those to come.”

Since the opening of the park last July, visitors have come from all over the world, including those from the KSA, other neighbouring GCC nations and international key source markets such as the UK, India, China, Russia and Germany. Additionally, the venue attracts visitors from all across the Emirates, including both Emirati and expatriate families.

“Our park offers guests a truly one-of-a-kind immersive guest experience, thanks to our authentically themed environments across six lands including Metropolis, Gotham City, Cartoon Junction, Dynamite Gulch and Bedrock (and Warner Bros. Plaza),” commented general manager Don Strickler. “In addition to over 35 iconic DC and Animation live characters, the park’s state-of-the-art rides, family-friendly entertainment shows, dining and shopping come together to create an unparalleled fan experience like no other in the region.

“We believe that the park’s unique offering undoubtedly serves to further enrich Yas Island and the UAE’s entertainment and tourism industry. Worldwide, consumer travel trends show that theme parks have become preferred attractions for families to visit on vacations and the UAE is no exception.” 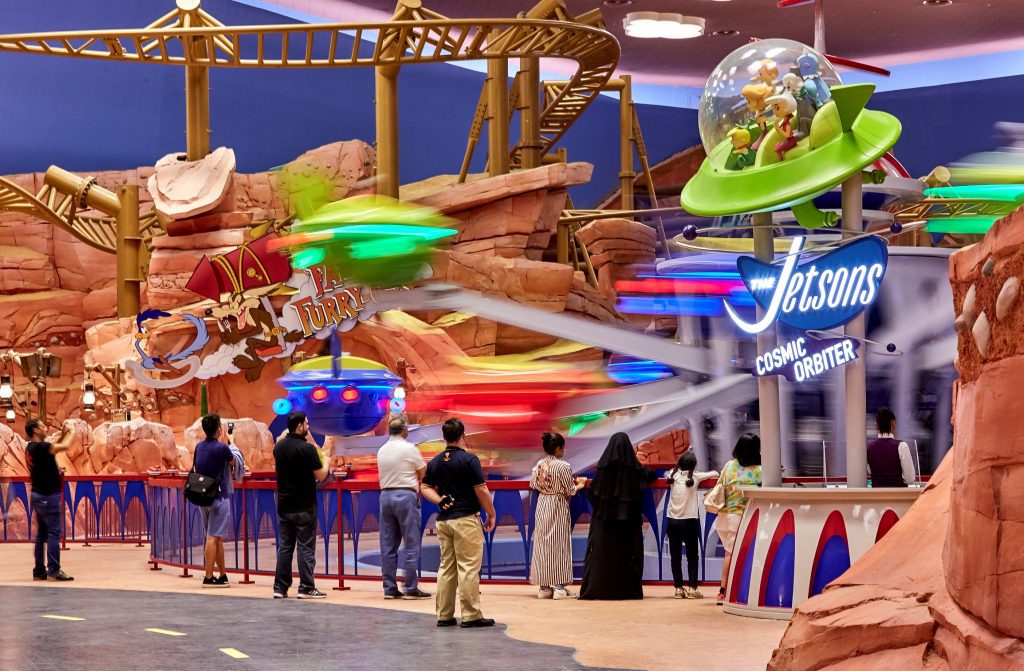 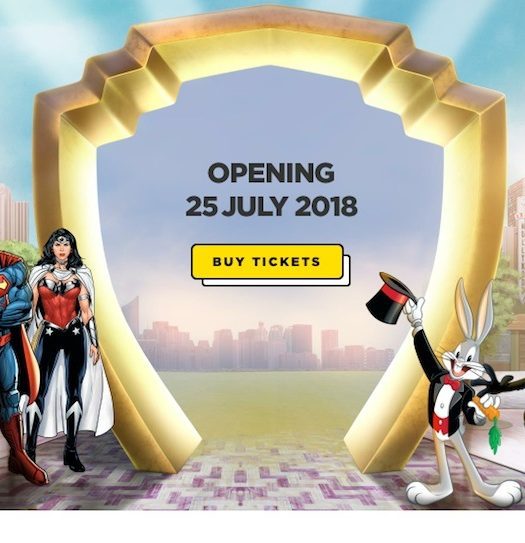