A launched water ride which was originally scheduled to open in 2020, Aquaman: Power Wave coaster at Six Flags Over Texas has been delayed until next year.

This represents the third delay for the attraction manufactured by Mack Rides.

The first delay was caused by the worldwide pandemic, causing a delay until 2021. The second delay, to 2022, was to allow the park to add a turntable station, allowing a second ride vehicle to load passengers while another is on the track.

This most recent delay has yet to be given an explanation by the park.

The water coaster will be the first of its kind in America, with the first found in Walibi, Belgium.

Riders will experience a forwards and two backwards launches up two vertical stanchions. When the coaster is sent up the tower backwards a second time, a splashdown pool will fill with water, taking six seconds, soaking the riders wet.

Aquaman: Power Wave will be the 14th coaster at the original Six Flags park – its first since the Joker FreeSpin coaster opened in 2017. 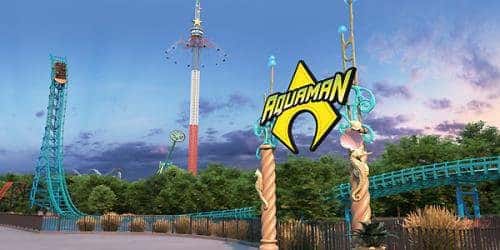