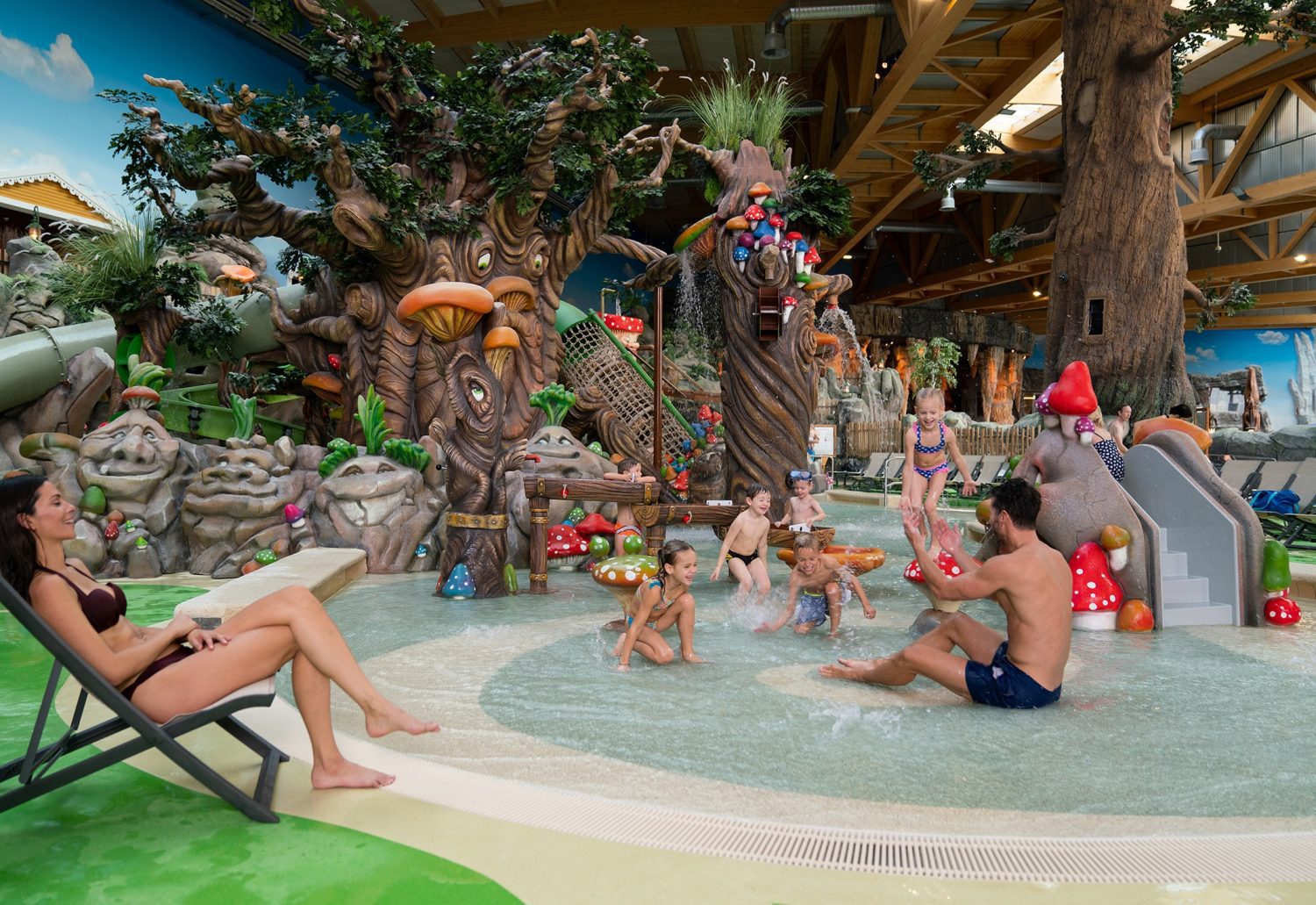 IN what marked the culmination of a 26 month construction period, the opening of the much anticipated Rulantica water world at Europa-Park in Germany took place at the end of November 2019. 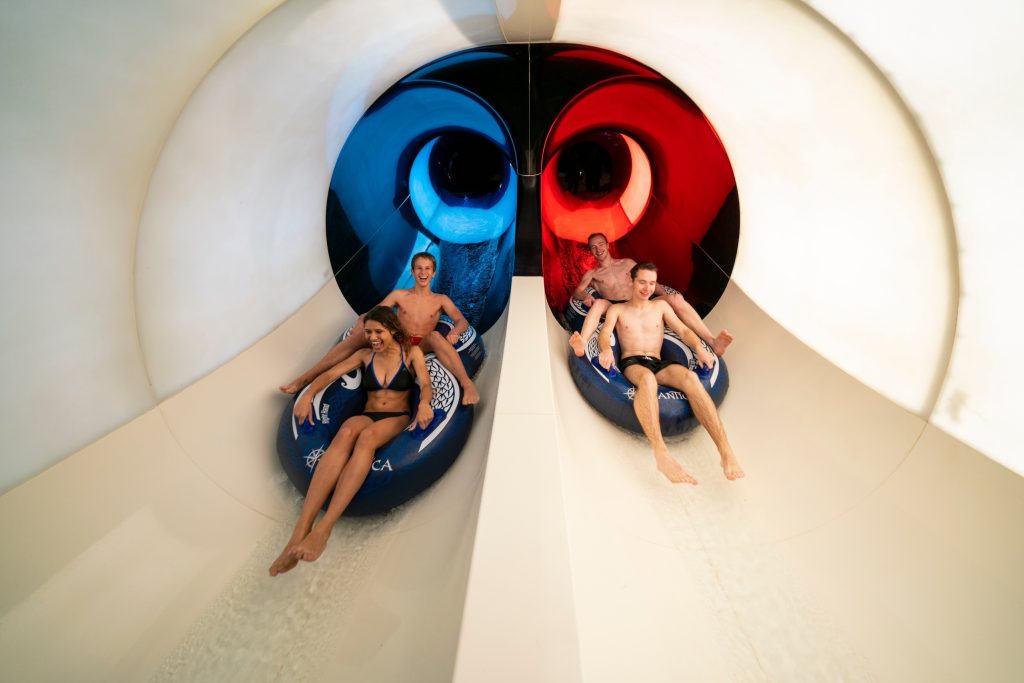 Representing the company’s largest ever single investment, the ground-breaking project, which is coupled to the venue’s sixth themed hotel, Krønasår, which opened earlier last year, has realised the Mack family’s dream of a second gate and provides guests with a spectacular Scandinavian-style water adventure world on an expansion site covering 450,000sq.m, which includes areas for further expansion. Now, all-year-round, visitors can explore nine themed settings and 25 unique water attractions, including 17 slides, across 32,000sq.m housed in a breathtaking, 20m high, shell shaped building. And outside in an additional 8,000sq.m area, guests can also enjoy a 500sq.m heated pool with additional attractions and facilities.

“Following over two decades of planning, we have realised our dream of creating one of the most spectacular water worlds in Europe, by building Rulantica on an expansion site covering 450,000sq.m,” said Europa-Park owner Roland Mack. “The new water adventure world, Europa-Park and the six themed hotels together offer a unique place to go for a short trip and the perfect holiday destination for families from near and far.” 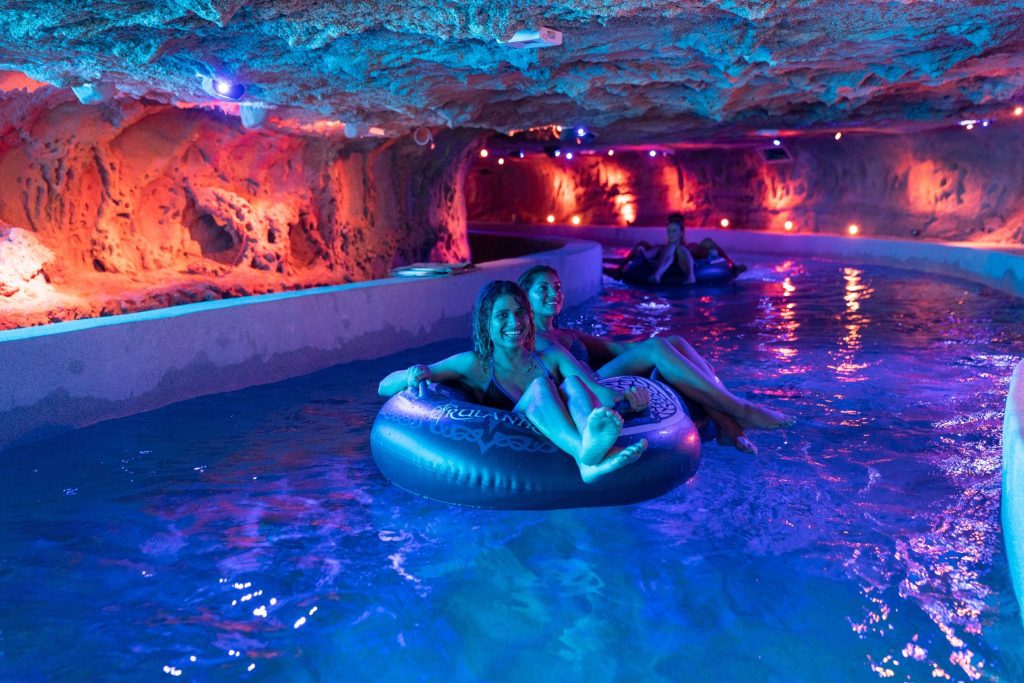 The impressive architecture of Rulantica will catch guests’ attention from the very start of their visit, after which they will be equally impressed with the venue’s unique mix of Scandinavian landscapes, mystical sceneries and imaginative designs. 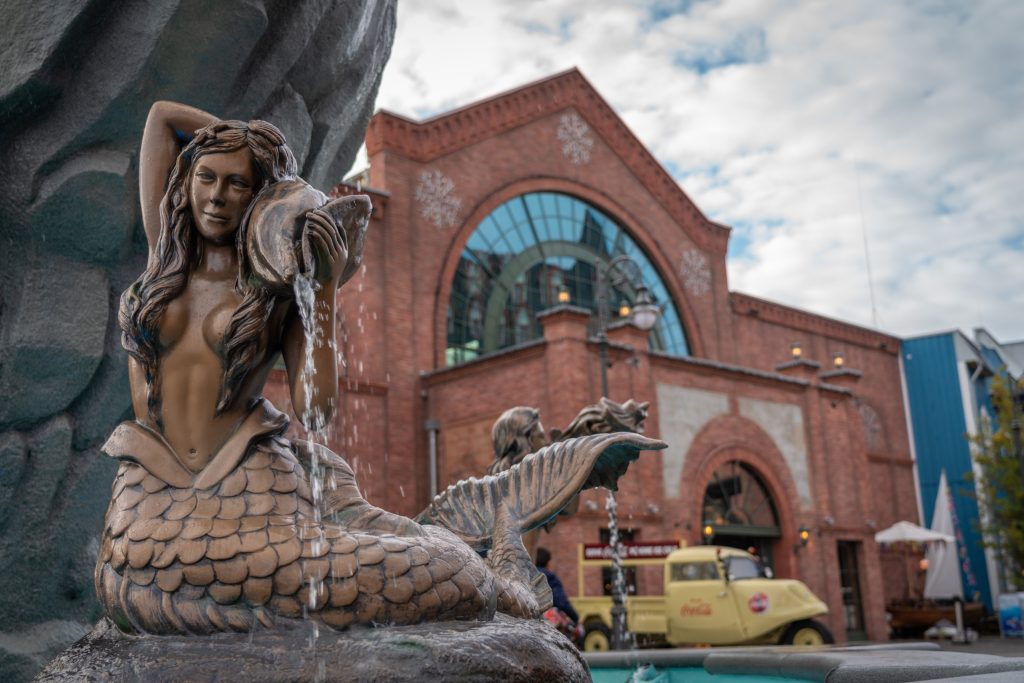 In Trølldal, younger guests are catered for with a large water playground, shallow pools, and climbing and playing facilities, Schabernakker, an exciting double slide for three to 12-year-olds, and the children’s slides Tommelplums and Kullerbuller. Additionally, the water playground features trees and rocks and is inhabited by peculiar little trolls – the native inhabitants of the legendary island of Rulantica.

The family attraction Snorri’s Saga also starts here. Together with the cute six-armed octopus Snorri, the mascot for the new indoor water world and a key character in the story of Rulantica, young and old are taken on a tour down the Lazy River and can settle into comfortable tubes alone or in pairs. The relaxed ride ambles down a winding 250m canal and past the various themed areas of the water adventure world. 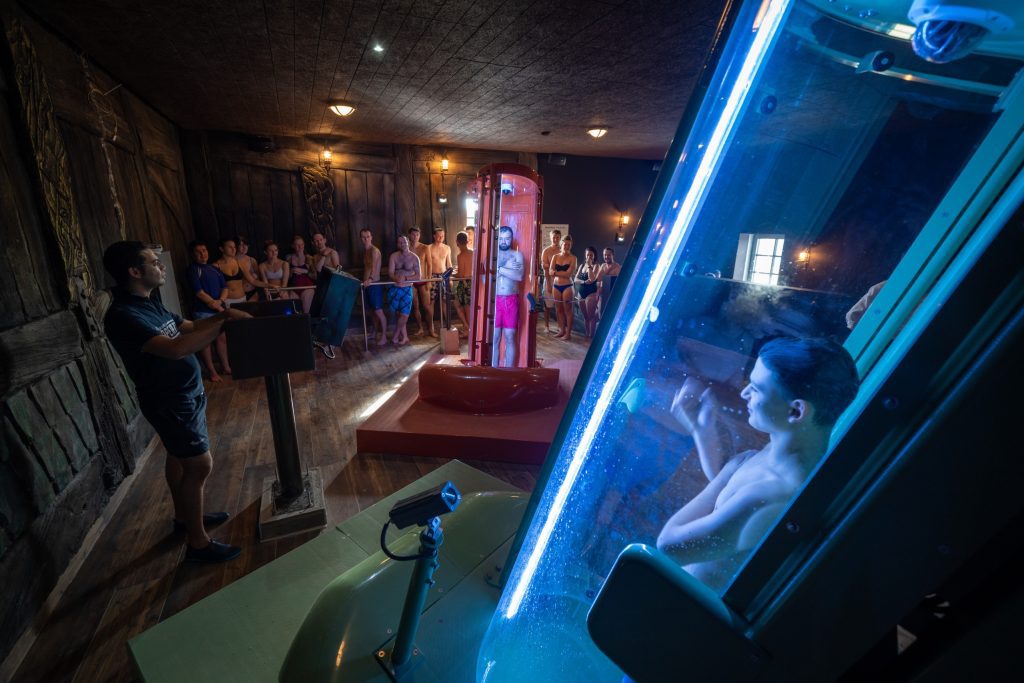 Rangnakor is themed as a city on stilts belonging to the inhabitants of Rualntica. Here guests can find eight Komfort Hyddas for four people, available at an extra charge, eight Komfort Sofas for two people, again available for a surcharge, along with the Skål Bar and the Snekkjas self-service restaurant. Also in the area are two AquaRocket free-fall slides, Dugdrob and Vildfål, and two adjacent slide tunnels, Odinrås – Hugi’ and Munin.

Vildstrøm features the Vildstrøm rapids attraction in the outdoor area of Rulantic in a Nordic landscape, while in Frigg Tempel is the Frigg Tempel heated outdoor pool and the Tempel Krog swim-up bar. 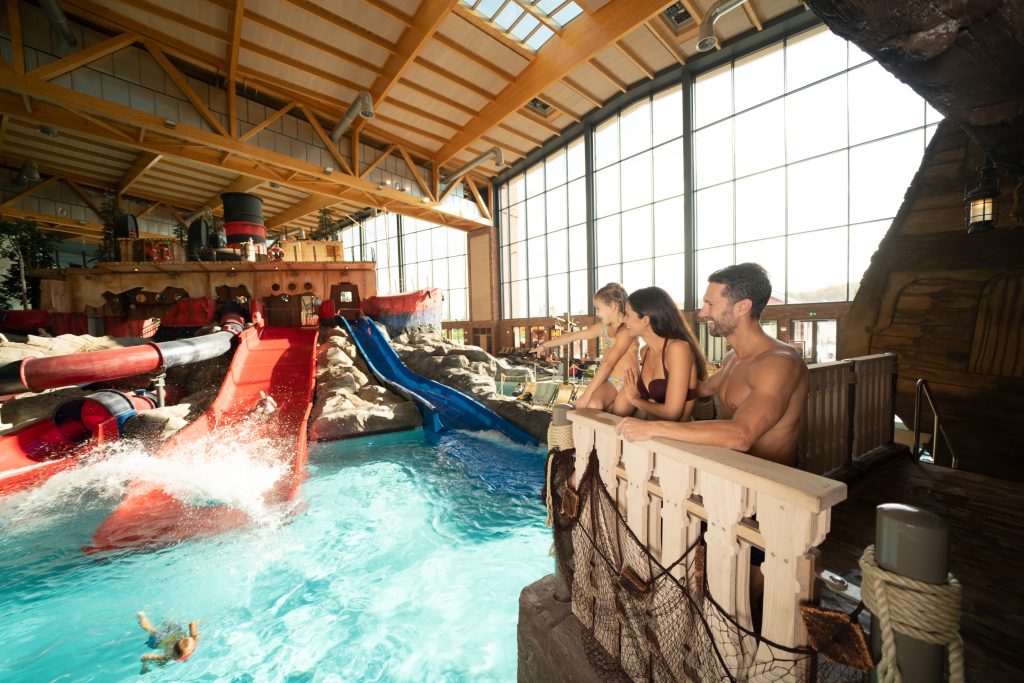 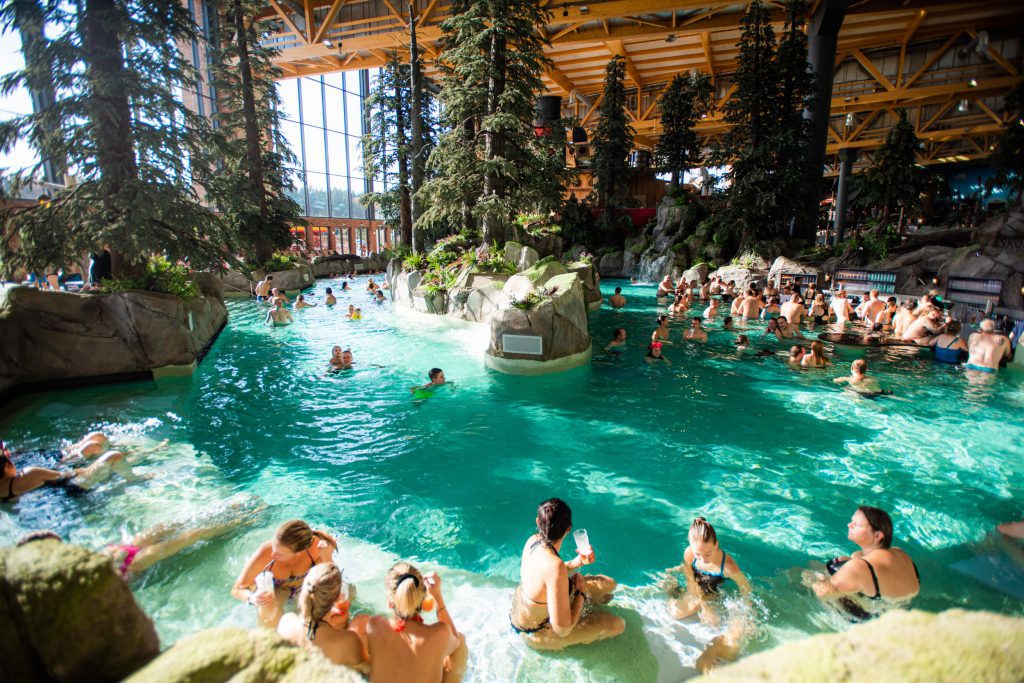 In Skip Beach guests can enjoy activities in an adventure pool featuring a sailing ship, steamboat, various family slides and an obstacle course, while in Skog Lagoon, a peaceful oasis awaits with bubble loungers, whirlpool and small waterfalls. The Skogbar swim-up bar is also featured here.

Finally in Lumåfals visitors will find a colourful grotto and waterfall along with the Surf Fjørd, a large wavepool in the heart of Rulantica, the Lumålunda self-service restaurant where guests can eat on the restaurant terrace of the Surf Fjørd, and Snorri’s Grotta shop where they can purchase a memento of their visit.

As well as all the slides and other attractions, Rulantica also provides guests with 200 changing rooms, 40 family changing rooms and 3,500 lockers in an 8,000sq.m changing area. Addiitonally, there are 1,700 indoor and 500 outdoor loungers. 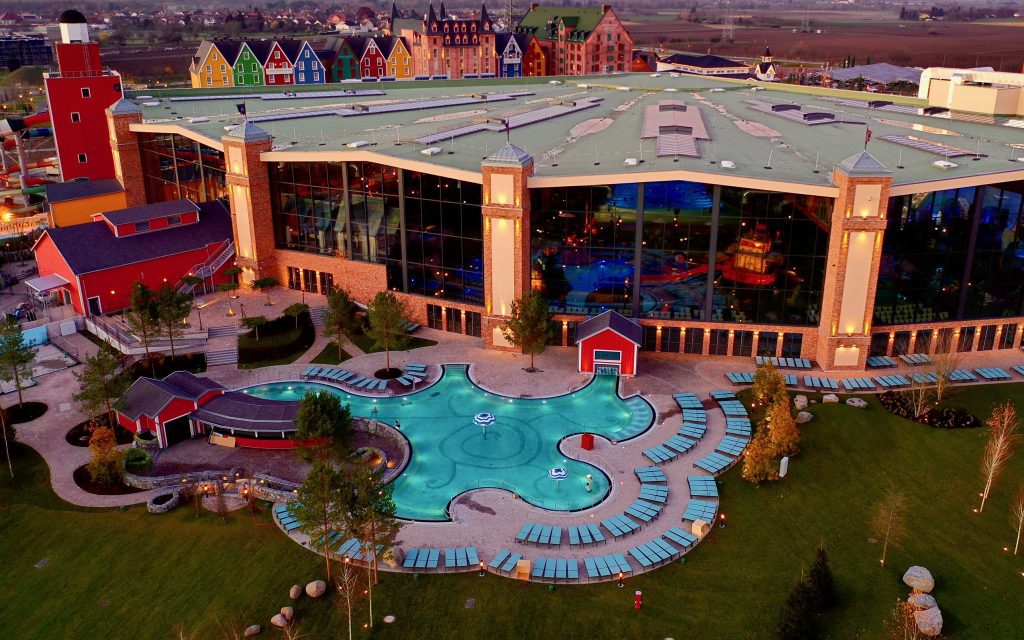 The new adventure water world is able to accommodate up to 3,500 visitors at any one time and with the way it is operated that will mean up to 5,000 guests per day. In the main, visitors will have to purchase tickets online in advance of their visit for admissin to the venue on a specific date. Day visitors can buy tickets online around three months in advance, while evening tickets are available one month in advance. Guests of Europa-Park hotels can book tickets when reserving their rooms (from November 29, 2019, to January 10, 2021).

As with Europa-Park itself, Rulantica has been carefully designed with sustainability and eoc friendly operation in mind, innovative technologies such as 3,000 solar panels on the roof over part of the car park (covering 8,260sq.m) being employed which are expected to generate around 1.1m kWh annually. Other measurers incorporated into the project to compensate for ecological damage include a bee pavilion, wildlife corridors and amphibian biospheres, along with the planting of 2,000 trees, 18,000 wild shrubs and 60,000 flowers. 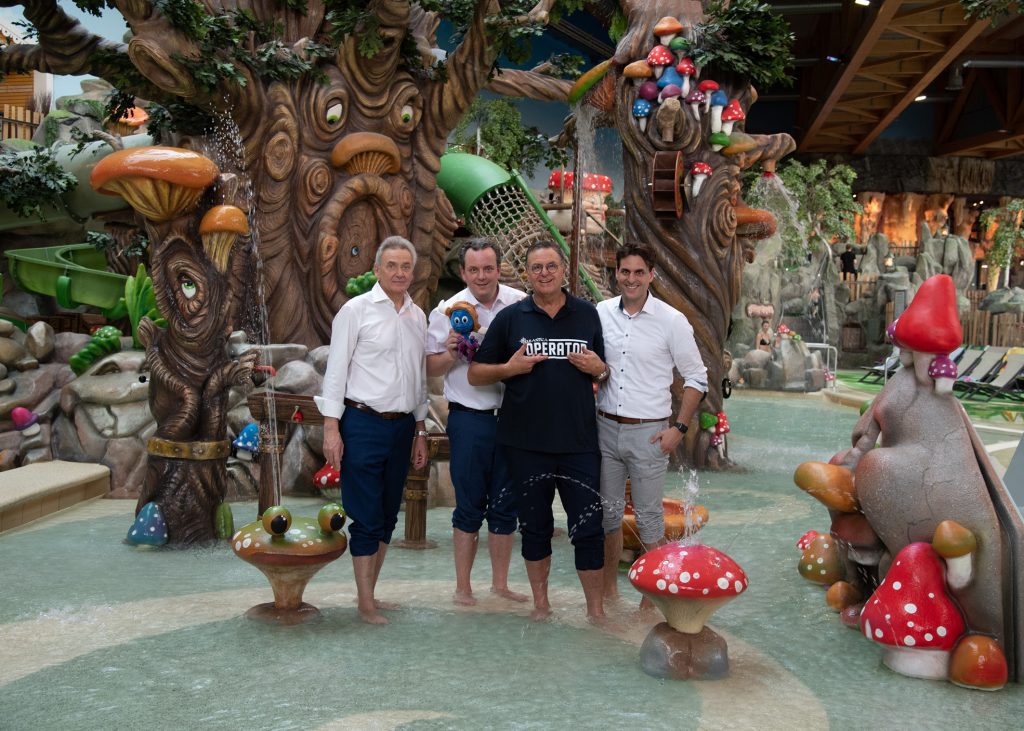 IP: Why did you decide to add a second gate?

MK: Since the first hotel opened at Europa-Park in 1995 the park has developed into more of a resort. The intention has always been to open another park and to do a year-round operation.

Previously we have been open from Easter to the start of November and then again from the end of November to mid-January. We looked to do something attractive in the other part of the year (when the park was closed) and to achieve this we needed a second gate. In surveys with our guests 60 per cent of them said they would like to see a waterpark as a second gate.

IP: What will the second gate achieve as far as length of stay at Europa-Park overall is concerned?

IP: How did you come up with the theme of Rulantica and who was behind its creation?

MK: When we did the first masterplan for the park we carried out an intense benchmarking process with other parks around the world. We hired Chip Cleary as the senior consultant on the project and PGAV helped come up with the first ideas. We also did a feasibility study with David Camp and came up with some strong figures which gave us the confidence to go ahead with the project. We also came up with something different as far as the theming was concerned and created a Scandinavian harbour and hotel linked to a whole storyline and a novel. So with this it was much easier for the design team to create the theming. We then decided on doing an indoor park with an outdoor area.

IP: How does Rulantica differ from other indoor waterparks in Europe and the rest of the world?

MK: Our customers expect to see heavy theming at Europa-Park and we have continued that in Rulantica with the same strategy. We will also grow the park over the years so what you see now is just the start. We will do other things and make it even better. We opened the hotel (Krønasår) on May 31, 2019, and this has been very successful, with a lake on one side and the waterpark on the other. And we didn’t choose the familiar Caribbean theming that so many others use but a Nordic theming so it was different.

IP: What were some of the main challenges you faced on the project?

MK: One was permits. It’s a very difficult process in Germany because of different regulations and much bureaucracy. Construction is also booming in Germany so it was hard to find companies to do such a big project. We had to get many different contractors involved in the project.

IP: What are the waterpark’s key elements?

MK: The slides, the theming, the wavepool, the lazy river and the wild river, a large outdoor pool, pool bars inside and outside, with a tent over the outdoor one in the winter, and two large F&B outlets.

IP: How many guests can Rulantica accommodate at any one time and how will this be controlled?

MK: Up to 3,500, with almost all tickets being pre-sold. We decided against people coming and buying tickets on the day to avoid having long queues and turning people away. We have a new ticketing system to help people reserve their tickets, which is a very good way of doing this. We strongly encourage the guests to purchase their tickets online in advance and up until today, this has brought very good results. Every day was sold out over Christmas and we have more ideas on this for the future. The average length of stay is six hours.

IP: Can you provide details of the key contractors involved in Rulantica, such as the manufacturers of the waterslides and other attractions and the theming providers?

MK: ProSlide provided many of the slides and Aquarena also supplied slides and the play structure. Murphy’s Waves was another supplier while the rock work was done by Universal Rocks and AAB. The creatives were provided by Mack Solutions Design. 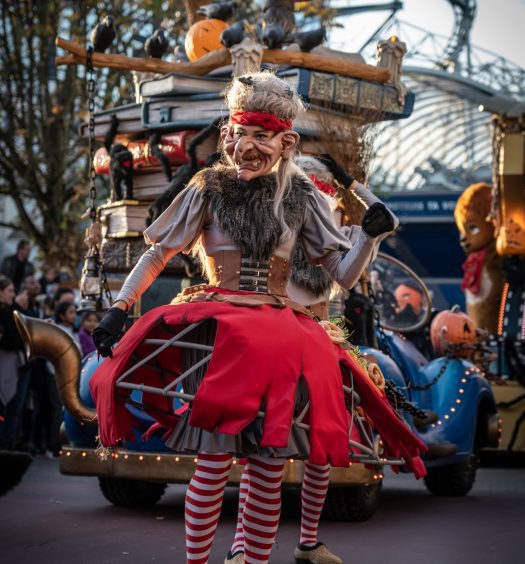